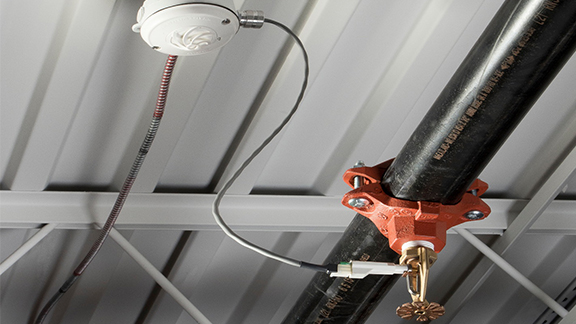 What if Your Sprinkler System Could Think?

Automatic fire sprinklers have remained relatively unchanged since their introduction in the 1800s. Advancements have been made, allowing for protection of more complex spaces and fire hazards, but the underlying fundamentals of how a sprinkler operates have not. Current fire sprinkler technology built on those fundamentals has become a limiting factor to rapidly evolving end-user needs. These needs, driven by ever-evolving technology, are seen clearly in the storage and warehousing sectors where e-commerce has changed the way consumers shop, forcing companies to change how they service them. Fast isn’t fast enough – two-day, overnight and same-day delivery are quickly becoming an expectation and logistics must evolve to support customer demands.

The UL Listed electronic sprinkler system consists of K16.8 ESFR sprinklers operated by an “intelligent” electronic sensing and control system. Electronic sensors detect the rate of temperature rise, which allows for quicker detection of a heat source. Once a fire is validated by multiple sensors, the system activates an array of sprinklers simultaneously to “surround and drown” the fire. This technology gets water to the fire sooner, avoids sprinkler skipping, maximizes the amount of water applied to burning materials, and pre-wets adjacent unburned fuels to help prevent lateral fire spread. This concept was validated with multiple full-scale fire tests performed at the Underwriters Laboratories large burn lab facility in Northbrook, Illinois.

The test setup consisted of standard Exposed Expanded Plastic (EEP) commodity – polystyrene meat trays shrink wrapped on oak pallets and stored on double-row racks under a 35-ft and 40-ft smooth flat ceiling. The sprinkler used in the testing consisted of an existing commercially available ESFR sprinkler with a k-factor of 16.8 gpm/psi 0.5 that was modified to operate electrically. The detection and control system utilized standard addressable heat sensors that were hard-wired to a commercially available fire control panel. There was a single heat sensor located within 12-in. horizontally above every sprinkler. The panel was programmed to operate up to nine sprinklers simultaneously through basic control logic. Sprinklers were selected for operation using a sensitive rate-of-temperature-rise detection algorithm, and activated once specific triggering criteria were achieved. Figure 1 details the set up for four full-scale tests that were performed.

During the test series the following observations were made:

* Burn through of a single pallet at very bottom of target array ignited by falling debris from main array.

The results of this investigation demonstrate that the simultaneous activation of fire sprinklers surrounding the point of fire origin electric fire sprinklers operated by an “intelligent” fire detection and control system can provide adequate protection of exposed expanded group-A plastics stored on racks in warehouse applications without the need for vertical barriers. Further, protection can be achieved with up to 55 percent lower total system water demand as compared to existing alternatives.

ABOUT THE AUTHOR: Gaurav Malik is global product manager of storage sprinklers and enterprise software, building technologies and solutions at Johnson Controls.