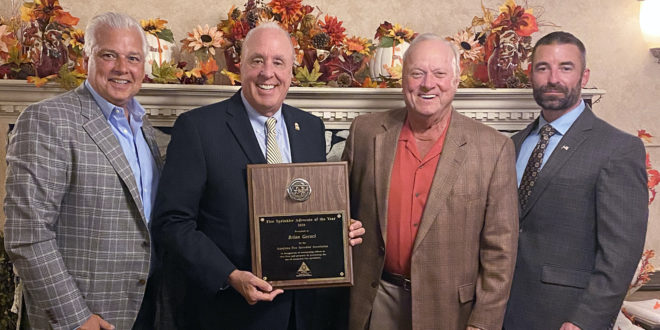 The American Fire Sprinkler Association (AFSA) was pleased to honor Maryland State Fire Marshal Brian S.  Geraci and present him with AFSA’s 2020 Fire Sprinkler Advocate of the Year award at a dinner celebration on October 27 at Olive Grove restaurant in Linthicum Heights, Maryland.

“Chief Geraci is very deserving of this award,” says AFSA’s Vice President of Engineering & Technical Services John August Denhardt, P.E., FSFPE, who presented the award. “His achievements on behalf of fire sprinklers and his dedication to life safety have benefited the residents of Maryland and beyond.”

“It was an honor to attend the dinner for the 2020 Fire Sprinkler Advocate of the Year,” comments Jay Strickland. “I’m proud to have known Brian for many years now. He has served the great state of Maryland well!”

He continues: “Brian is truly a servant leader, always putting others first. He has fought for fire sprinklers because he has a passion to serve and protect. Brian’s passion for the Maryland Fallen Fire Fighters is very evident, nearly bringing people to tears. His dedication does not go unnoticed. Thank you and congratulations!”

AFSA’s Fire Sprinkler Advocate of the Year award was created to honor individuals not directly involved in the fire sprinkler industry whose efforts have had a national impact in advancing life safety and property protection through the use of automatic sprinklers. Each year, members of AFSA’s Legislative Committee select a recipient from a pool of nominees. Their nomination is then approved by the AFSA Board of Directors.

“It was an honor to have been present to see Chief Geraci receive AFSA’s Fire Sprinkler Advocate of the Year,” states Manning Strickland. “I have known Chief Geraci for over 30 years. He was a friend of fire sprinkler systems when Strickland Fire Protection was getting started. He was always willing to meet and discuss various options for fire protection. He is a man who is worthy to receive this award, and I wish him a great future.”

Historically, the Fire Sprinkler Advocate of the Year award is presented at the general session of AFSA’s annual Convention, Exhibition & Apprentice Competition. However, due to the coronavirus pandemic, AFSA39 was not held in person.

AFSA is proud to recognize those individuals who have given extraordinary support to furthering the advancement and awareness of fire sprinklers. All three of AFSA’s annual awards—the Henry S. Parmelee Award, Fire Sprinkler Advocate of the Year Award, and Young Professional of the Year Award—are accepting nominations year-round at firesprinkler.org/awards.. 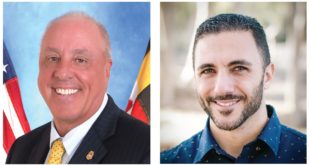 Join AFSA Online October 7 Coming soon to a computer screen near you! Join the …