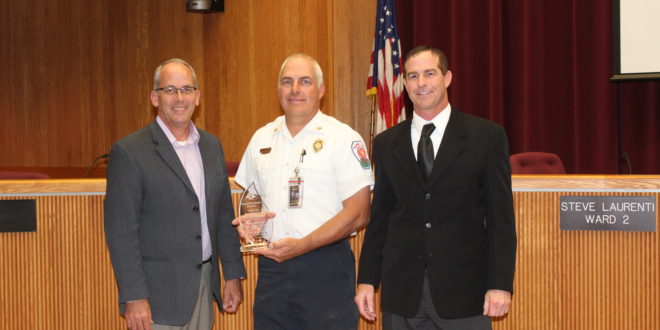 Over his 30-year career as a firefighter, Chief Behlings has spent 17 years in the Rapid City Fire Department Fire and Life Safety Division, and in 2009, he was promoted to division chief and fire marshal. He has worked for the fire marshal’s office and as an arson investigator, but it was during his three terms on the Custer City Council and 15 years on the city planning commission that Behlings says he learned the importance of building trust with the public and coalitions with his peers.

Behlings said, “The award bears my name, but the credit really needs to be extended to all who have been involved over the years. It is the strong collaborative effort, development of professional relationships and focus on customer service throughout our community that has allowed the efforts of the Rapid City Fire Department Fire and Life Safety Division to be successful in our expanded application of fire sprinkler protection here in Rapid City.”

Chief Behlings has navigated the waters of amending the state fire code to significantly reduce the threshold to require sprinklers and initiated common sense solutions that have enticed business owners, developers and homeowners to choose fire sprinklers.

“Fire sprinkler protection remains the most effective tool in our toolbox as it relates to community risk reduction efforts,” said Behlings. “The steps taken in Rapid City to promote fire sprinkler installation are not complicated and can be duplicated anywhere with a little dedication and a basic passion for finding solutions which remove hurdles.  We created fire code amendments to expand fire sprinkler application to include existing occupancies, implemented developer/builder options, support phased retrofitting, creative protection concepts, fire sprinkler based public education programs which include school-age children, and a low-interest life safety loan program developed to support retrofitting.”

The Rapid City Life Safety Loan Program has supported 1,044 fire sprinkler retrofits on a wide diversity of occupancies over its 15 years and has resulted in 33 documented fire sprinkler saves with one civilian injury, zero civilian and firefighter deaths, and millions in property and business loss prevented.

DiBona said, “Tim Behlings is, clearly, a deserving recipient of this award. He is recognized as a non-typical fire marshal, encouraging creative, out-of-the-box solutions to meet the objectives of adopted codes and standards. His philosophy places a greater emphasis on educating and problem solving rather than just enforcement activities. Being a stanch community risk reduction and fire sprinkler advocate has given Chief Behlings the opportunity of allowing Rapid City’s experiences to be shared across the State of South Dakota, including testimony before the South Dakota Legislature. For Chief Behlings, promoting public safety is truly a passion and not just a job.”

EDITOR’S NOTE: AFSA established the Fire Sprinklers Save Lives award in 1998, to recognize individuals outside the fire sprinkler industry who help dispel the myths about fire sprinklers by generating public awareness about this life-saving technology. AFSA’s Public Education & Awareness Committee accepts and recommends nominees for this award and they are approved by the AFSA Board of Directors. To nominate someone for the award, email AFSA Director of Communications Nicole Duvall at nduvall@firesprinkler.org explaining who you would like to nominate and why. The nomination will be considered at the next meeting of the committee.

Previous Here Is Your Sign
Next Basic Codified Issues