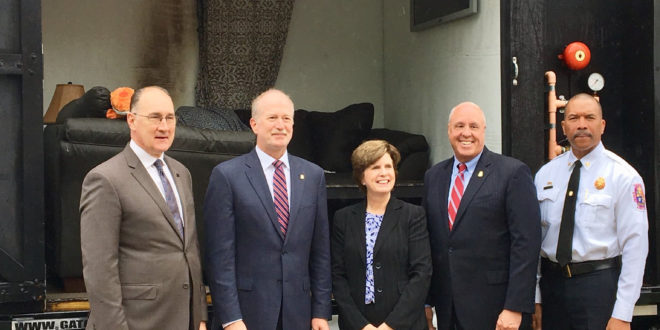 A Vocal Advocate and Fierce Defender

“Fire prevention is our most important service” is the motto of the Silver Spring Fire Department in Maryland, and a phrase Brian Geraci says has pushed his career down a path that includes being a vocal fire sprinkler advocate while working in the fire service. Geraci currently serves as the Maryland State Fire Marshal and he excels in educating about the importance of fire sprinklers from the perspective of the fire service as a life-saving tool that is not only beneficial but necessary. While he has had many impressive accomplishments in his long career, the American Fire Sprinkler Association (AFSA) is proud to honor him as its Fire Sprinkler Advocate of the Year for his consistent efforts to ensure that fire sprinklers are installed in new Maryland homes, as well as for his overall advocacy efforts in support of the fire sprinkler industry.

With his eyes on the fire service ever since childhood, Geraci began his career in June of 1973 when he applied for the Wheaton Volunteer Rescue Squad in Montgomery County, Maryland. In his first position as an emergency medical technician, Geraci received training at the Montgomery County Public Safety Training Academy and attended station training and meetings. From this beginning, Geraci quickly transitioned into the role of firefighter for the Silver Spring Fire Department in Silver Spring, Maryland, in 1976.

While working at the Silver Spring Department, Geraci recalls he “got the bug” that he wanted to become a fire investigator. However, to do so, Geraci had to complete fire code enforcement classes. Determined to pursue his passion, Geraci attended the classes until he became a fire investigator. During his studies, Geraci also became a fire inspector alongside his firefighting duties, which led to him addressing code issues and expanding his existing knowledge of fire sprinkler systems. As an inspector, Geraci worked in downtown Silver Springs, before promotion landed him at the County Fire Marshal’s Office in the fire code enforcement division. After spending some time in that position, Geraci was promoted to sergeant in 1988, and became a fire investigator. After that, he was promoted to lieutenant in 1992 with the County Fire Marshal’s office, which then led to a promotion to captain/commander of the Montgomery County Fire Rescue Service (MCFRS) Fire Code Enforcement Section in Rockville, Maryland. From there, Geraci held a few more positions, including serving as the MCFRS battalion chief for the Fire and Explosive Investigation Section/Bomb Squad in Gaithersburg, Maryland, as well as the coordinator for the Arlington County Fire Department Bomb Squad Unit in Virginia.

Geraci’s relationship with fire sprinklers is a long one. The pursuit of his passion to work as a fire investigator, and later a fire inspector, provided a natural introduction to and lifelong work with fire sprinklers. His background and training for these positions aided in Geraci’s knowledge of sprinkler systems, sprinkler system testing, and other aspects of fire protection systems.

Maryland is one of two states that currently require residential fire sprinklers in new homes (the other being California). This legislation was passed under Barnard. As his successor, Geraci has continued Barnard’s work, being a vocal advocate of that legislation, and a fierce defender when the legislation has come under fire. After the initial passing of the legislation in 2012, legislation was introduced in 2015 that would have allowed rural counties to “opt-out” of the new mandate. However, Geraci testified in favor of the importance of fire sprinklers and the legislation was ultimately rejected, upholding that all of Maryland would be required to install residential sprinklers in new homes. “We always anticipate [opposition], we prepare for it, and look for it, but we also have sent a pretty clear message that the [sprinkler legislation] isn’t going away,” says Geraci.

The fire sprinkler fight is an ongoing one that Geraci works tirelessly on. “Since his first day as the Maryland State Fire Marshal [Geraci] has been a strong and vocal advocate for fire sprinklers,” says Terry Victor, senior manager, industry relations at Johnson Controls Fire Protection, Upperco, Maryland, who nominated Geraci for this award.

Despite the huge accomplishment of defeating the opt-out legislation, Geraci has not simply rested on that victory. “[Geraci] has always been a huge advocate of fire sprinklers. He continues to lead the charge to defend the state requirement mandating fire sprinklers in all residences,” says AFSA Board of Directors’ First Vice Chair Jack Medovich, CEO of Fire & Life Safety America, Richmond, Virginia.

The result of this call for a more defined system of enforcement and who should be doing the enforcing of the existing laws is the recent passing of Maryland House Bill 823 and Senate Bill 746 that will take effect on October 1, 2020. These laws will require the state fire marshal to enforce any requirements relating to the installation of automatic sprinkler systems in new one- and two-family dwellings.

With the new legislation in place, Geraci’s office, now more than ever before, will be involved with fire sprinklers through enforcement and ensuring that each new home is outfitted with the life-saving technology of residential fire sprinklers.

“I’ve known Brian for 20 years or better, and we worked on a lot of different things together when he was still with Montgomery County Fire Rescue,” comments Barnard. “One of the things I’m really happy with is seeing him continue to work on progressive ideas and build on the foundation that we laid over the years.”

A Legacy of Protection

Since the passage of sprinkler legislation, fire deaths in the state are down 55 percent, and Geraci credits that to residential fire sprinklers and smoke alarms. With the current coronavirus pandemic, Geraci admits he was concerned that those numbers would rise with many staying at home more than ever. However, he mentions that because of sprinkler systems, even though there are more incidents of fires, more people are getting out safely and surviving these incidents than ever before.

Geraci is also a familiar face seen at local AFSA and association meetings. “He participates in and speaks at local sprinkler chapter meetings. He speaks openly about the benefits of fire sprinklers and fights for the mandate for residential sprinklers in all single-family homes in Maryland,” says Victor.

Geraci says he attends meetings to keep local chapters informed on what is going on with the legislation and the state of Maryland. Notes Medovich: “He attends our local AFSA meetings to advise and assist our members in dealing with state requirements whenever asked or needed.”

When asked about participating in these meetings and getting to know the local chapter members, Geraci highlighted the importance of “having relationships and partnerships with local chapters,” as it is a great way to coordinate charitable events, update any current legislative issues, and educate local inspectors and contractors. “We’re stronger together, and we work best when we work together,” he states.

Geraci is pleased to accept this award but also enthusiastically acknowledges that, “While I am accepting this award, I want to highlight that it is really a team effort; it’s everyone working together. Local association chapters and the Maryland fire service—when we come together, we are a force to be reckoned with. When you mix the volunteer, career, and bring in the associations, we are a tough crowd to knock down.”

Geraci underlines that it’s cooperative work from all these parties that makes things better for not just Maryland citizens, but also Maryland firefighters. “Many firefighters in Maryland are volunteers, and since they are giving their time and energy for us, having the [residential sprinkler] laws in place are going to make things better and safer for them when they selflessly give us their time.”

Geraci also highlighted the importance of the staff he works with at the Office of the State Fire Marshal. “It’s a team effort and I’m lucky to have great people working for me because it definitely makes things easier!”

He continues, “I’ve been blessed through my career in the assignments I’ve received and the people I’ve worked with. It’s all been a blessing.”

AFSA’s Fire Sprinkler Advocate of the Year award was created to honor individuals not directly involved in the fire sprinkler industry whose efforts have had national impact in advancing life safety and property protection through the use of automatic sprinklers. Each year, members of AFSA’s Legislative Committee select a recipient from a pool of nominations. Their nomination is then approved by the AFSA Board of Directors.

“I was so glad Brian was selected for this award,” comments AFSA’s Vice President of Engineering & Technical Services John August Denhardt, P.E., FSFPE. “I have worked with him over the years, and I have watched him support the benefits of sprinkler systems at the local and state government levels. He has been a great team builder, ensuring sprinkler legislation stays in place and enforcing non-compliance issues.  Brian is a true advocate for sprinklers.”

Historically, the Fire Sprinkler Advocate of the Year award is presented at the general session of AFSA’s annual Convention, Exhibition & Apprentice Competition. However, due to the ongoing coronavirus pandemic and the postponement of AFSA39, new acceptance arrangements are currently being made.

AFSA is proud to recognize those individuals who have given extraordinary support to furthering the advancement and awareness of fire sprinklers. All three of AFSA’s annual awards—the Henry S. Parmelee Award, Fire Sprinkler Advocate of the Year Award, and Young Professional of the Year Award—are accepting nominations year-round at www.firesprinkler.org/awards.

ABOUT THE AUTHOR: Rebecca Herring is communications coordinator for the American Fire Sprinkler Association.