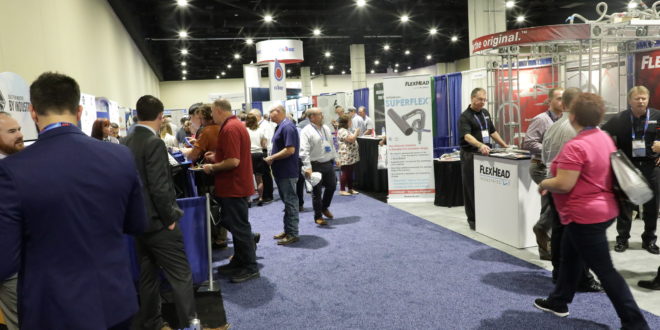 Tradeshows such as AFSA37 showcase emerging technologies in the fire sprinkler industry.

The CEO and the Lawyer

National conventions for the construction industry are great opportunities to see what new ways to work smarter are on the horizon and some of the best ways to implement those. The American Fire Sprinkler Association (AFSA) is planning for AFSA38: Convention, Exhibition and Apprentice Competition this fall, and the Associated Builders and Contractors (ABC) recently held its national convention, both which showcase the latest advancements in the fire protection and construction industries. In this article we have summarized what new technologies are being used in the field and legalities to consider when utilizing them.

More Technology Every Year Johnson: I have had the pleasure to attend several construction conventions during this past year and my absolute favorites were the AFSA national convention in Washington DC, and the ABC National Convention and Craft Championship in Long Beach California. Both conventions had new applications, technologies, and advancements in the construction field. Many of you reading this article may have been at the AFSA’s latest convention, but if you missed it, don’t miss AFSA38 in San Diego this fall!

Walking through the ABC convention hall this year was a fantastic experience. I had two of our fourth-year apprentices competing in the National Craft Championship and I had plenty of time to walk around while the builds were happening. Every year, it is a bigger and bigger show, but every year, there are more technology booths and less tools and vehicles. Even the tool and equipment booths are filled with technology now-a-days.

It seems like almost every fourth job has a requirement to use a somewhat proprietary, project specific, software for plans, requests for information (RFIs), and document management. Five years ago I would have laughed if you told me my construction foremen would all be carrying iPads. These advances have really improved the speed and accuracy of communications with regards to owner-directed changes and other changes or clarifications in our scope.

Lambert: It’s true. We see that on almost every construction contract and project now that there is some requirement for technology to be used or an explanation that a particular type of software or system is going to be used to manage certain aspects of a job. Even on smaller projects, we’re seeing, at a minimum, change order management and agreement being done in the field on tablets or laptops to keep the job moving and to keep all the parties on the same page.

Advances in Technology Johnson: One of the biggest advances I saw was the use of virtual reality to conduct safety training and walk throughs. I happened to walk up to one booth where Secretary of Labor Alexander Acosta was trying out a new virtual reality safety orientation software. We all watched as the secretary virtually walked around the job site. He was led to areas of egress, areas where he needed to be tied off, and even areas where the fire extinguishers were located. He was even able to act through responses to emergency situations. He explored this virtual job site, looking at areas that were potentially dangerous for more than 20 minutes while his Secret Service detachment kept a sharp eye out for dangers in the real world. It was pretty cool.

Safety technology was all the rage at this convention. I saw hearing protection that could be adjusted to the specific hazard that you were going to be exposed to. Gloves and sleeves that have cut-resistant technology. I was amazed to see the latest and greatest tools with dust collection technology to meet the new silica requirements from the Occupational Safety and Health Administration (OSHA). There was some amazing new air sampling/warning equipment for use in confined spaces. There were virtual cranes, lifts, and forklifts. And who needs MSDS books anymore… we now have smartphone apps that can handle that for us.

Lambert: And this technology is a great tool to work smarter, safer, and educate employees without having to actually place them in a potential harm’s path. One of the interesting issues with this type of training and education is how far ahead it is of safety regulations. Most code or safety regulations do not contemplate using this type of technology. So while it may comply with the spirit of a regulation, whether it meets the letter of the regulation may depend on how progressive the relevant municipality or agency is.

Johnson: One technology that we have adapted for our use is ultrasonic flow meters. These meters measure flow through piping to within .01 gallons per minute. We have started to use this technology instead of pitot tubes on acceptance testing for pressure-reducing valves (PRVs) and fire pumps. It is amazing the time and effort this saves us, it saves labor while we are at it, and everyone stays dry.

GPS tools can also now be used to import coordinates and data from software (i.e., CAD) and place lasers on construction sites. This could be used to locate sleeves, install walls, or place fixtures without needing to take measurements from arbitrary control lines.

Lambert: These tools are great, too, not just in the precision with which they allow companies to perform their work, but also in the precision with which they allow one company to determine whether another has adequately performed their portion of the work. A great way to ensure the use of these tools is to incorporate requirements for them in your contracts and to indicate that they will be used to measure work performance. This can eliminate costly disputes over whether work was performed correctly or conforms to the plans and specifications. It can also eliminate the need for destructive testing.

Knowledge is Key Johnson: A lot of these concerns fall on companies that are traditionally subcontractors, too. At the convention, one of the common sales pitches I heard to general contractors was that they could require subcontractors to use and pay for the new technology to the benefit of the contract. As technology continues to advance, we have to be aware of what is coming down the pipe on our job sites of tomorrow. We will have to adapt to new contractual requirements as well and budget for them.

I will be attending AFSA38 in San Diego, October 1-4 to see what new technologies the manufacturers and suppliers will be bringing to the exhibit hall. It’s definitely worth the investment.

Lambert: Agreed! All of these technological advancements make it much easier to work smarter and safer on a job site. And it’s important to take a 360-degree view of these advancements, too, because while the obvious benefits are demonstrated in the field, there may also be benefits (or potential pitfalls) in the office. I mentioned using contracts above to ensure that your subcontractors or vendors are up to speed, but adding a new technology in the field should also mean looking at how you train and hire employees and what (if any) additional requirements exist with new technologies. With a little forethought, implementing new technology can be much easier.

ABOUT THE AUTHORS: Chris Johnson is president and CEO of Piper Fire Protection, Inc. located in Clearwater, Florida. He is a NICET certified fire protection engineer, holding a level III certification in fire sprinkler design. Johnson is the chairman for AFSA’s Florida Chapter and serves as a member of AFSA National’s Legislative, Chapter Development, and Public Education & Awareness committees.

Jason Lambert is a civil trial attorney Nelson Mullins Broad and Cassel located in Tampa, Florida, who focuses his practice on representing businesses in commercial and complex litigation, with an emphasis on the construction and real estate industries. His clients include contractors, subcontractors, material suppliers, developers, and financial institutions. He is also well-versed in appellate law, with experience in appeals arising from a variety of contexts, including commercial leases, business sales, and earn-out agreements, contract interpretation, trade secrets, and arbitration rights. Prior to beginning his career in the law, Lambert spent almost a decade working in the construction and development industry.