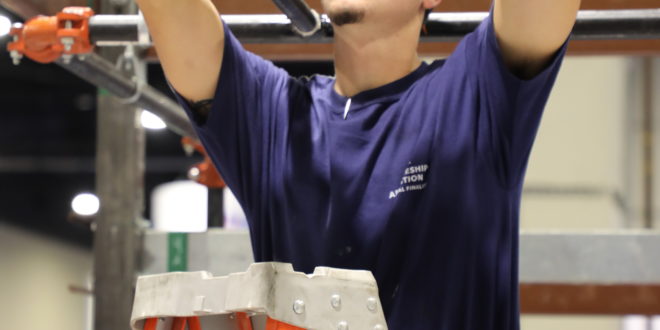 Best of the Best Compete at AFSA37

On October 2, 2018 hundreds packed into the buzzing exhibit hall at AFSA37: Convention, Exhibition & Apprentice Competition in Washington, DC, to witness seven finalists compete in the silver anniversary, 25th Annual National Apprentice Competition hosted by American Fire Sprinkler Association (AFSA). The convention and competition were truly a convergence of top industry apprenticeship talent, which drew an impressive crowd of nearly 1,400 industry professionals from all over the world.

After outscoring over 100 other hopefuls to secure a position in the top seven apprentices of 2018, Bryan Teddick of HTH Automatic Sprinkler, LLC in Goshen, Connecticut, found himself at AFSA37 September 30 – October 3. Placing in the top seven was just the tip of the competition iceberg, though, as Teddick still had to outscore the six other well-qualified finalists to claim the first prize.

How Did We Get Here?

When approaching the end of his time of technical high school at age 17, Teddick started with HTH Automatic Sprinkler. He heard about the position working his volunteer firefighting job with the Morris Volunteer Fire Department in Morris, Connecticut. After one of his fellow firefighters encouraged him to apply his plumbing knowledge from technical school with HTH, the position quickly fell into place.

Fast forward to 2018 when Teddick chose to participate in apprentice competition due to his employer’s encouragement. After making up his mind to participate, he hit the books as hard as he could, studying for the written examination which is based on all four levels of AFSA/NCCER Contren® Learning Series Sprinkler Fitting curriculum. He credits his great memory for being able to “commit a lot of the flash cards I created during my extensive studying to memory which helped the test go smoothly.”

When Teddick completed the first round of testing and was informed he had scored in the top seven apprentices and would be traveling to Washington, DC to compete in one final round of written testing and the live apprentice competition, he hit the books again. However, this time he received some helpful study tips from a familiar source, his co-worker Joe Perry, winner of the 2012 National Apprentice Competition. Perry was happy to provide Teddick with insight regarding what to expect at the competition and some strategies for preparing.

Additionally, Teddick was proud to credit his family for being “huge supporters,” even going so far as to help him study between the two tests, giving him advice, and walking him through anything he felt lingering nerves about.

Quickly, AFSA37 and the live testing and competition arrived. Teddick recalls he was “pretty nervous about the competition itself and the test.” He didn’t let that deter him on his path to winning, though, and instead, he channeled his energy into finishing the written exam efficiently and to the best of his ability.

For the practical portion of the competition, each finalist was given a drawing of the mini fire sprinkler system and all of the required materials to install it. Finalists then constructed the systems, comprised of five sprinklers onto a 9-ft tall metal frame structure. Competitors had to measure, cut, thread, and use fabricated materials for the installations per the drawing they were provided. This exercise required pipe threading, math, and pipe make-up skills to complete the mini-system in the four-hour time limit. The CPVC section of the system was joined using one-step solvent cement. After the entire system was installed and allowed to set, it was placed under a static water pressure test of approximately 80 psi, with points deducted for any leaks or pressure drop.

Teddick recalls of the live competition, “It goes by quickly, and while I know it is stuff I do every day, it’s not every day you do it in front of 1,400 people.”

During the mini-installation, the apprentices were judged in three areas – accuracy, craftsmanship, and safety – to form their practical score, which was then combined with their written test score to determine the winner.

At the Newseum awards party, the hard work of the seven national apprentices was recognized. The night rounded out with the naming of its newest winner – Bryan Teddick.

Teddick recalls when he heard his name it was “nothing like it.” He recounts, “I kind of had a feeling I did well, but I wasn’t sure exactly how well. When they announced my name, it kind of came as a surprise to me.”

And Teddick wasn’t the only one who was pleased. Chair of the National Apprentice Committee and Region 3 Director of the AFSA National Board Rod DiBona of Rapid Fire Protection in Rapid City, South Dakota, recalls, “I was standing in the crowd at the Newseum. The pinnacle for me was watching the seven apprentice finalists stand on the stage and get recognized. The anticipation to see who the top three and ultimately who the top fire sprinkler apprentice in the nation would be was thick in the air. The champion was announced and unbeknownst to me a woman grabbed my arm and shrilled with emotion and excitement, ‘That’s my son!’ It was a cool moment – a proud mom of a young man who had just won a national competition.”

The admiration of family goes both ways, however, as Teddick was sure to mention that he wanted to give an extra big thank you to “my family and my co-workers, without both of them I wouldn’t have made it this far. They went above and beyond helping me prepare and that’s something I’ll never forget.”

“Myself and everyone at HTH Automatic Sprinkler LLC are so very proud of Bryan’s win,” comments from Scott Tillmann, manager/owner of HTH. “My entire team of fitters and Bryan’s family were in DC to give him support. The competition is such a great way to encourage all apprentices to learn, work hard, and take pride in their career in the fire sprinkler industry. This is the third time we have won the competition and each time it is such a huge uplifting feeling of accomplishment.”

All seven of the finalist apprentices won an expense-paid trip to Washington, DC to compete at AFSA37, a commemorative plaque, tools, cash prizes, and a complimentary convention registration for their employer to attend the convention to cheer them on!

History of the Competition

Started in 1994 by the late Robert L. (Bob) McCullough, then chairman of the Apprenticeship & Education Committee, AFSA’s Annual National Apprentice Competition was created to promote apprentice training and give recognition to the apprentices who are actively enrolled in the AFSA apprenticeship program. Nearly 25 years later, the competition continues to draw fire sprinkler apprentices from AFSA local chapters and member training programs from all corners of United States together in the association’s foremost showcase of excellence in training among future industry leaders.

Enrolling in AFSA’s apprentice training program not only offers an excellent education and a fulfilling career, but it is also the gateway to competing in the AFSA National Apprentice Competition. Entry forms for next year’s competition at AFSA38: Convention, Exhibition, & Apprentice Competition at the Manchester Grand Hyatt in San Diego, California, will be made available spring of 2019. For more information or to view photos of the apprentices in action as well as other convention activities, visit firesprinkler.org/apprentice.