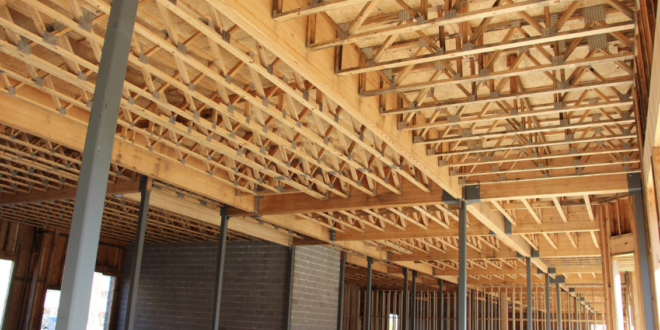 Sprinkler Protection and the 3,000 ft2 Modifier

NFPA 13, Standard for the Installation of Sprinkler Systems, allows the omission of sprinkler protection from some combustible, concealed spaces for both wood joist and combustible wood joist construction. (See section 8.15.1.2.) Historically, though, only the composite wood choice had to apply a 3,000 ft2 remote area. That changed in the 2010 edition of NFPA 13 (all references hereafter are to the 2016 edition). Although it’s now been six years, there’s still some confusion on this issue.

Let’s start off by talking about the joists themselves. Considering the severity of incorrectly identifying these structural members, you’d think it would be identified in Chapter 3 – Definitions, but they have always been addressed by the annex and it’ll likely stay that way. If you haven’t already, take a quick look at A.3.7.1 Obstructed Construction (this is also where you’ll find the only guidance that defines obstructed construction starts at 4 inches). As defined therein, both are solid members. It’s interesting that within sections 8.15.1.2 and 11.2.3.1.5.2 it states solid only for wood joist but not for composite wood joist. The basic description of the two members are: Composite Joist being an “I” cross section (up to 48-in. deep), a wide range of chord widths but a thin web, and being fabricated wood, burns faster than ordinary lumber; and Wood Joist being a rectangular cross section (up to 14-in. deep though this is not a maximum dimension but only typical for more current lumber sizes), a nominal width of 2 to 4 inches (greater than 4 inches is a beam), and burns slower. The reason for treating these members so differently is the much thinner and much faster burning fabricated wood allows a fire to extend beyond the original joist channel much faster.

Another basic item that is sometimes misunderstood is the process for omitting sprinklers and applying the 3,000 ft2 modifier. Sprinklers can’t be omitted from any concealed space just because a 3,000 ft2 remote area is applied. The first step is going to section 8.15.1.2 and/or 8.15.6 to determine whether sprinklers can be omitted. Then section 11.2.3.1.5.2 is checked to see if the larger remote area is required. You’ll notice that there are 18 allowances for omitting protection (not counting sections that address noncombustible construction other than the one regarding combustible insulation since they are effectively in the wrong location), but only eight allowances for omitting a 3,000 ft2 remote area.

Although not the focus of this article, allow me to diverge and briefly discuss two items that have yet to be adequately addressed by the standard and can cause significant problems. One is the issue of section 8.15.1.2.18 – Exterior Soffits, Eaves, Overhangs, and Decorative Frame Elements. Does omitting sprinklers from these locations trigger the larger remote area? As stated in section 11.2.3.1.5.1, unless meeting one of the allowances in section 11.2.3.1.5.2, unsprinklered combustible concealed spaces as described in sections 8.15.1.2 and 8.15.6, the minimum area of sprinkler operation shall be 3,000 ft2. Since section 8.15.1.2.18 is part of the referenced section 8.15.1.2 and there isn’t a similar allowance in section 11.2.3.1.5.2, as things stand today, the answer is yes. This allowance was added to section 8.15.1.2 in the 2010 edition and, to the best of my recollection, there was never a public input submitted on chapter 11 (controlled by a different technical committee from the one that added the chapter 8 material). There is an allowance for the remotely related exterior columns and more importantly the exterior elements are separated from the interior of the building by noncombustible construction as well as restricted to the prevalent 160 ft3 volume. Considering that the larger remote area is to offset fires breaking out of the concealed space in multiple locations, it makes no sense that a larger remote area is appropriate. Until we address this issue in the next cycle, a variance from the Authority Having Jurisdiction (AHJ) is the only path for not having a larger remote area.

The other issue is how to address cloud ceilings. It’s addressed by its own section 8.15.24 (which is not referenced by section 11.2.3.1.5.2) and that implies that it is a separate situation like several others in section 8.15 where sprinklers are omitted without a larger remote area. This makes sense because the cloud ceiling issue is about whether or not the lower ceiling is an acceptable upper boundary for the room. The space above the cloud ceiling is then effectively a concealed space. It becomes a little messy because there is one paragraph (8.15.1.2.1.3) that limits the overall percentage of openings in the ceiling. Why this was not simply added to section 8.15.24 confounds me since its location has no value in defining when one can omit sprinklers, but, unfortunately, does ambiguously (and unintentionally since it wasn’t discussed) requires one to apply a 3,000 ft2 remote. It is part of the referenced section 8.15.1.2 without an allowance omitting the larger area. Further muddying the water is the fact that section 8.15.1.2.1 (of which this paragraph is a part) is about noncombustible construction for which a requirement for a larger remote area makes no sense. Now, if this were combustible construction, I can see the logic for a larger remote area. Again, until it can be addressed next cycle, it must be resolved (before submitting your plans) with the AHJ.

Returning to the actual topic, section 8.15.1.2.5 allows omitting sprinklers when ceilings are attached directly to or within six inches of wood joist. Section 8.15.1.2.6 is a similar but more restrictive allowance for composite wood joist that allows omitting sprinklers when the ceiling is directly attached to the joist but the joist channels must be firestopped into volumes no larger than 160 ft3. The allowance for a 6-in. open gap below the joists is not allowed. There can be a 1-in. metal channel (used to reduce transmission of sound from the upper floors) but the small gap must be covered by at least 31/2 inches of batt insulation. This criteria has been in the standard a long time (with the metal channel modification occurring in the 2002 edition) so it’s well understood when you can omit sprinklers.

Jumping forward to chapter 11, we’ll look at the requirements for a larger remote area. There was a nice improvement whereby the criteria are no longer located within a group of other requirements under the title Restrictions. It now has its own section 11.2.3.1.5 Unsprinklered Combustible Concealed Spaces.

The criterion for wood joist is:

There are multiple restrictions imposed on the related criterion that allowed omitting the sprinklers. The 6-in. gap below the joist is not allowed. The unlimited volume is not allowed with the frequently seen 160 ft3 limit on volume imposed on the individual joist channels. It’s interesting to note that there is no guidance on firestopping. The reality is that for this type of construction, the channels terminate at a wall before reaching the limit. For example, a 12-in. joist on an 18-in. spacing can run almost 107 feet before hitting the volume limit. Additionally, there is no allowance for a metal channel with insulation. To the best of my memory, this issue has not been discussed by the technical committee. I would not jump to the conclusion that it is acceptable. Although it is part of the requirements for separating the volume of adjacent channels for composite wood joists for omitting protection that only confirms that the 31/2 inches of insulation is considered equivalent to the thin manufactured wood. This is another item for the next cycle. A final comment on this paragraph is that the last portion regarding space beneath insulation is a tortured sentence leading to mass confusion. What it’s attempting to portray is if you have a sprinklered concealed space, like an attic, where there is insulation laid across the top of  the wood joists, the open joist channels beneath the insulation (which some might call unprotected) does not require a 3,000 ft2 remote area.

The criterion for composite wood joists is:

“(10)*Light or ordinary hazard occupancies where noncombustible or limited-combustible ceilings are attached to the bottom of composite wood joists either directly or on to metal channels not exceeding 1 in. (25 mm) in depth, provided the adjacent joist channels are firestopped into volumes not exceeding 160 ft3 (4.5 m3) using materials equivalent to 1⁄2 in. (13 mm) gypsum board, and at least 31⁄2 in. (90 mm) of batt insulation is installed at the bottom of the joist channels when the ceiling is attached utilizing metal channels.”

The single issue that is often misunderstood is the firestopping. Most automatically interpret it as described in section 8.15.1.2.6 where material is installed perpendicular to the joist and the volumetric limit applies to the individual joist channel. This is not the case. With the correct understanding, the difference in text is obvious but it is subtle. 8.15.1.2.6 says: “… the joist channels are firestopped into volumes…” whereas 11.2.3.1.5.2(10) says: “… the adjacent joist channels are firestopped into volumes…” In other words, you have to install the firestopping parallel to the joist so that the volume between firestops is no more than 160 ft3. Fortunately, it is clarified by the annex (provided one has also the opportunity to read it) where it states:

“A.11.2.3.1.5.2(10) The gypsum board (or equivalent material) used as the firestopping will compartment the concealed space and restrict the ability for fire to spread beyond 160 ft3 (4.5 m3) zones covering multiple joist channels.”

Firestopping has been given a broader application than just in a single joist channel and has been expanded regarding the types of materials required for fabrication. In hindsight, it would have been better to have called this application draftstopping (as used within the building codes). So the intent is for the installed material to contain the fire within a zone between the firestopping/draftstopping boundaries. I’m belaboring this point not just to break the old mindset about it addressing just a single joist channel but because it begs the question as to whether the 31/2 inches of insulation is required when there is a metal channel. At the moment, the answer is “yes” because that’s what the standard says. To be honest, this nuance wasn’t discussed and the text was automatically copied from section 8.15.1.2.6. After all, it has to be there in order for sprinklers to be omitted in the first place. Since there’s no difference in the level of hazard presented by a single channel that is 160 ft3 and several channels that have a combined volume of 160 ft3, if the firestopping is present there is no reason to also have the insulation when channels exist. Again, this would require concurrence by the AHJ and, again, another item for the next cycle.

Since the architects virtually never know the nuances of NFPA 13 that can be impacted by the construction of the building, they aren’t going to apply it. If the architect doesn’t apply it, the likelihood that the contractor will start modifying how a portion of the building is constructed is slim. If anyone has actually seen it applied, please send an email to me at rhuggins@firesprinkler.org. The bottom line is, this allowance is seldom going to be applied so if composite wood joists are present, count on having a 3,000 ft2 remote area.

ABOUT THE AUTHOR: Roland Huggins, P.E. is the vice president of engineering and technical services for AFSA. He is a graduate of the University of Maryland and a member of the NFPA. Huggins has served on the NFPA Standards Council and is a member of multiple NFPA technical committees, including NFPA 13, NFPA 25, and NFPA 5000 (Building Code). NFPA activities include participating on the editing of the Sprinkler Handbook and Fire Protection Handbook. Other national activities involve the NFPA Research Foundation, UL Standard Technical Panels, and NICET. Huggins is a veteran.