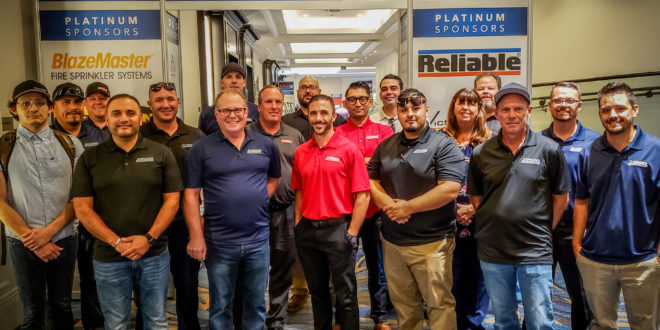 Jamil Shamoon lives by the “Golden Rule.” But treating others the way he’d like to be treated is far from the only reason for the 39-year-old, father of four’s success. As owner of Symons Fire Protection in Poway, California, Shamoon has worked in various positions of the fire sprinkler business literally working every position in his business. By investing his sweat equity and never being one to say “no” to an opportunity, Shamoon has built a successful contracting company with over 90 employees serving Southern California. He has also served in several volunteer leadership positions, such as chair of the American Fire Sprinkler Association’s (AFSA) San Diego Chapter and various involvements with other trade and charity groups.

For these reasons, AFSA is pleased to announce that Shamoon has been elected by a panel of his peers on the NextGen Initiative (NGI) as the recipient of AFSA’s 2020 Young Professional of the Year (YPY) award. The award highlights the efforts of a young and talented fire protection professional, who is under 40 and demonstrates exemplary technical, professional, and inclusive leadership skills not only in their own businesses but also at a national level.

From Helper to Owner—Building a Career

Like many in the fire sprinkler industry, Shamoon found himself a career by chance. Growing up in Southern California in a working-class family, he wasn’t sure what he wanted to do professionally. But when he was in high school, fate presented him an opportunity when his neighbor asked him to care for his newly hydroseeded lawn. The job wasn’t hard—water the grass once a day—but Shamoon, who says “any job worth doing is worth doing well,” took it seriously. At the end of the month, the neighbor, who was a foreman at Symons, was so impressed by his work ethic that he offered him a job on the spot as a helper.

Engaged to his high school sweetheart, Shaunna, Shamoon wanted to get to work building his career. He gained tons of hands-on experience as he rose through the ranks in the field, becoming a fitter, foreman, then a project manager. As a project manager, his responsibilities covered a wide variety of areas, from estimating, managing the shop, overseeing the field crew, and scheduling installations.

His job was challenging yet enjoyable and he strove to better understand the meaning behind his work and wanted to learn design. His business couldn’t afford to take him out of the field during the week to dabble in design, so Shamoon took the initiative to invest a couple months’ worth of Saturdays to go into the office and learn. This wasn’t in his job description nor was he paid for that time, but what he learned gave him a great foundation for the rest of his career.

Shamoon studied business at San Diego State University but is quick to point out that his degree, while helpful, was not the driving force behind his success. “My practical, real-world experience combined with an education created a lot of opportunity for me,” Shamoon said. “College taught me how to learn and absorb information, and my real-world experience taught me how to do something productive with that information. I brought a lot of what I learned at school back to the company.”

Shamoon believes his practical field knowledge paired with his education better prepared him to take on all the responsibilities that came with being vice president, then president, of a fire sprinkler company. Along with ensuring the success of his business, Shamoon is now focused on becoming a better leader. “I always say that people are the most rewarding yet most challenging part about running my business,” he said.

Every day he is learning how to better manage people and maintain a good work environment while maximizing productivity. He said, “This journey has required a lot of personal development and self-reflection. I always remind myself that as a leader, it is my responsibility to continuously develop myself to be the best leader I can be for my team. I can’t change everyone else, but I can change myself, and doing so hopefully inspires others to grow and develop as well.”

When asked about how he made such a remarkable career progression from helper to owner in just 20 years, Shamoon said with his trademark humility: “I never said ‘no’ to anything. I was always the first one to volunteer, but not selfishly. I never asked, ‘What am I going to get out of this?’ I just wanted to help get the job done right and gain as much experience as I could in the meantime.”

In short, his advice on how to succeed is to “outwork the people around you and continue to educate yourself every day.”

When notified about his being named AFSA NGI’s 2020 Young Professional of the Year, Shamoon was genuinely surprised. “I am where I am because I wanted that exposure to knowledge,” he said. “To do that, I sat on committees to be around the people who know all these things that I wanted to learn. Building those relationships as you serve, it creates a network that you can then go back to and ask for help or an introduction.”

Since he says he is typically the one nominating others, Shamoon never expected any accolades, but his hard work and dedication are frequently noted by those whose paths he crosses. In fact, the Building Industry Association (BIA) of San Diego County named him its Mechanical, Electrical, and Plumbing (MEP) Trade Contractor of the Year in 2015. Shamoon is currently a board member of the San Diego County’s Specialty Contractors Council (SCC) for BIA.

But Shamoon’s volunteer leadership doesn’t stop there. In his nomination letter, Anthony Spencer, formerly with Lubrizol, said, “Jamil has given his time to benefit the industry through the association but also by offering his expertise to the Tyco Premier Contractor Network. I know firsthand that Jamil has assisted [BlazeMaster] in market innovation and development of literature that promotes the fire industry. He has always been willing to do what needs to be done all while running the day-to-day operations of Symons which has turned into one of the premier residential contractors. Amazingly enough, he has done all this while raising a family and committing himself to being involved locally as well.”

Shamoon is also the past chair of AFSA’s San Diego Chapter where he has stepped up to install residential fire sprinkler systems in homes for wounded Veterans. Through his local International Code Council (ICC) chapter, he has trained Authorities Having Jurisdiction (AHJs) and building department officials on codes and inspections.

In March 2020, Shamoon and Ray Fremont, Jr. of General Air Products presented “How to Build Your Management Skills Before You’re Management” as part of the NextGen webinar series. To date, it holds AFSA’s record for most attendees for a business management topic—235 connections. In reflecting on management, Shamoon said, “Preparing for management is not easy. People assume managers don’t do anything, but often they don’t realize just how difficult a job it is. Most people aren’t ready. The people who rise to the occasion do better.”

A big proponent of investing in his people, he is always looking for ways to give his employees the opportunity to hone their skills. “To grow, I had to stretch myself,” Shamoon said. “Many people would walk away from a challenge, but instead I looked at it as an opportunity. To win, you have to show up and say yes.” As he puts it, “What is the point of doing all this, if you can’t give back?”

In his free time, Shamoon and his wife of 22 years are active in their church, leading small groups for young families and couples when they are not with their four children—Elias, 18; Alexia, 14; Adelin, 9; and Aleah, 4.

“I am so grateful for Shaunna’s support—it has been instrumental in my success,” comments Shamoon. “Her dedication to our family and carrying the load at home has allowed me to grow to where I am today.”

A Leader Among Leaders

This years’ nominees were of an extremely high caliber, and the finalists showed unrivaled commitment to excellence both inside and outside of the workplace.

“From the first time I met with Jamil, his passion for the industry was evident,” said NGI Chair Meaghen Wills, Anchor Fire Protection. “He truly cares about the fire sprinkler industry and he has a real admiration for his employees. His biggest asset is wanting to see them all succeed individually. He believes that’s what makes the company succeed as a whole. That is a true leader.”

In talking about him, many commented that Shamoon is a model of work ethic, integrity, and innovation. Spencer continued, “Jamil cares a lot about the success of the fire sprinkler industry. He has found ways to look towards technology and used it to benefit Symons. He is looking for continuous growth for his company, himself, and his employees. He has tried to invest a sense of accountability and education with his employees. He tries to hold them as good role models for the industry but also their families. He has been involved in many aspects of the industry and brings this education/technological aspect to each meeting. He pushes and asks questions to get those around him thinking of how to better the industry.”

Longtime friend Darren Palmieri of Viking Corporation said, “I’ve had the pleasure of knowing Jamil for nearly 15 years and have watched him grow into a leader not only at his company, but also in the sprinkler industry. He is exactly the type of leader we should be honoring with this award—he’s an unwavering promoter of fire sprinklers, extremely creative, and hardworking, and takes on every challenge with the utmost integrity. I cannot think of someone who deserves this award more than Jamil. I’m deeply thankful to know him, and proud to call him a friend.”

This year marks the 5th annual YPY award—presented by AFSA’s young professional group the NextGen Initiative (NGI). For five years, AFSA’s NGI has been on a mission to recognize the outstanding talent and achievements of young professionals in the fire sprinkler industry. These young professionals aged 40 and under can be described by a variety of adjectives—movers and shakers, innovators; but by all definitions, NGI’s YPY award winners are most recognized for how they shape the business landscape with their passion and sense of community. The award also seeks to promote the emergence of young, talented professionals and inspire companies to invest even more in the development and excellence of the profession.

“Jamil’s successes are a direct reflection of his unrivaled work ethic,” says Rhonda Gudger, AFSA San Diego Chapter executive director. “He knows and understands the value of sacrifice, fortitude, and teamwork. He has an insatiable passion for helping others. His compassion for people is extraordinary. Jamil selflessly volunteers his time an energy to support any project the San Diego Chapter deems a priority—Homes for Our Troops in the San Diego area, local AFSA golf tournaments, NextGen events, and Trade Days. Not only does he volunteer the labor and material, he helps plan, organize, and execute on a grand scale. Jamil’s enthusiastic, can-do attitude, has inspired others to collaborate on a variety of fundraising efforts.”

Due to COVID-19, alternative plans are being made to present the award to Shamoon. The award is typically presented during the general session at the annual AFSA Convention, Exhibition & Apprentice Competition, which was postponed this year due to the global pandemic. For more details on AFSA or its NextGen Initiative, visit firesprinkler.org.

ABOUT THE AUTHOR: Nicole Duvall is director of communications & social media for the American Fire Sprinkler Association.