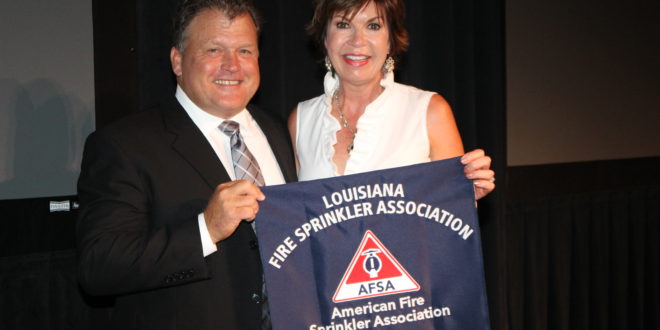 Outstanding Chapter of the Year 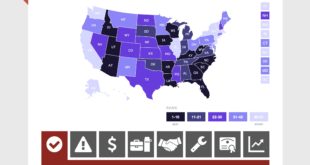 At the American Fire Sprinkler Association’s (AFSA) 35th Annual Convention & Exhibition in Nashville in September, the Louisiana Fire Sprinkler Association (LFSA), a chapter of AFSA, was honored with the Outstanding Chapter of the Year Award. This award was created to recognize exceptional chapters that do excellent work representing AFSA across the country and promoting the fire sprinkler industry through regular meetings, events, and charity work. While many AFSA chapters are exemplary, this year LFSA truly exceeded all expectations and made a name for itself as the 2016 Outstanding Chapter of the Year.

Selecting the Outstanding Chapter The other chapters that applied for the Outstanding Chapter of the Year honor included last year’s winner the Carolinas Chapter, the Greater Bay Area Chapter, and the Sacramento Valley Chapter. While each of those chapters is outstanding in its own right, the final decision was made by the Membership & Chapter Development Committee, chaired by Wayne Weisz of Cen-Cal Fire Systems, Inc. in Lodi, California.

“All of the chapters that applied put a lot of time and effort into getting the application put together,” says Weisz. “Each one of them are winners in that regard. As was the case last year, the scoring was very close. Each of the three groups that scored a particular section of the application realized through the process that final scoring would be close.”

In the end, when the final tally was counted up, Louisiana came out the winner. “I was surprised but also very happy for Chapter Vice President Mark Taylor, Chapter President Linda Biernacki, and everybody with the Louisiana Chapter who contributed a lot of their time into applying for this award,” says Weisz. “Congratulations to them! I also want to compliment the Louisiana Chapter for the great job they do all year round.”

What Makes a Winning Chapter LFSA was created on December 23, 1986. Past presidents include Don Albares of American Sprinkler Co. in Harahan; Alan Laguna of Merit Sprinkler in Kenner; and Eugene Dunavant of Mid South Fire Solutions in Shreveport. In 2007, Linda Biernacki, president of Fire Tech Systems, Inc. in Shreveport, became the chapter’s president, and the chapter became even more involved in local contractors’ lives. At every quarterly membership meeting, the chapter schedules AFSA national speakers to present half-day seminars on technical topics that are pertinent to its members. The chapter also sponsors plan review seminars free of charge, where Authorities Having Jurisdiction (AHJs) can receive valuable information as well as Continuing Education Units (CEUs).

In 2016 alone, the chapter has held multiple events of which it is extremely proud. Listed below are some of the activities that brought LFSA to the winner’s circle.

In April 2016, the chapter hosted a successful vendor fair and jambalaya lunch. All seven vendor tables were filled, and the jambalaya lunch was prepared by Chief Butch Browning, the Louisiana state fire marshal.

Last year, the chapter donated $5,000 to toward building the Memorial Stage at the Louisiana Fallen Firefighter’s Memorial in Baton Rouge. This year, it donated $2,500 to build a canopy over that stage.

LFSA has been actively encouraging its members under the age of 40 to get involved in industry activities, and last year it held its first NextGen Mixer. At the mixer, professionals under 40 mingled with seasoned business professionals over hors d’oeuvres and cocktails, learning about the business and networking. The mixer was such a hit that it was held again this year in October in Baton Rouge, and a mixture of contractor and associate members were in attendance, along with AFSA representatives and several suppliers.

On October 26, 2016, the chapter held its 10th Annual Juvenile Diabetes Research Foundation (JDRF) Golf Tournament in memory of Brad Bella, the son of former Louisiana State Fire Marshal V.J. Bella, who died at the age of 11 from Type 1 diabetes. Last year, the golf tournament raised $20,000 for this worthy cause. In 2015, the tournament had 86 players, and that number grows each year. In the 10 years that the golf tournament has been held, the chapter has raised over $160,000 for JDRF.

Out of all of these wonderful events, Biernacki is most proud of the quarterly seminars that the chapter hosts. “It’s standing room only, and a great way to grow our membership,” says Biernacki, who also serves as secretary of the AFSA Board of Directors. “We offer a networking luncheon to meet and talk to the AHJs, suppliers and fellow members. It’s been very successful and rewarding.”

Biernacki also notes that there are only 22 contractor members in the chapter, and she encourages smaller chapters to apply for the honor and stay engaged in the industry.

Recognizing Greatness As a national association, AFSA has from the beginning recognized that many of the most important and significant achievements of the association are accomplished at the local chapter level. That is why AFSA is thrilled to be able to recognize the wonderful work that LFSA does for the industry, the community, and its members.

Bradley Elliott, AFSA director of member services, has nothing but glowing praise for the chapter. “Congratulations to the members of the Louisiana Fire Sprinkler Association for this outstanding accomplishment,” says Elliott. “One of AFSA’s greatest strengths is our chapters, and we commend LFSA’s first-class commitment to education, events, and membership.”

As the 2016 winner, the association was recognized at the Nashville convention and received a banner to display at meetings and other events 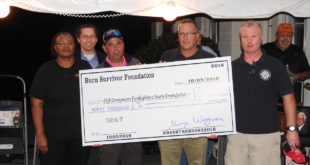 Chapters in Communities: Making a Difference