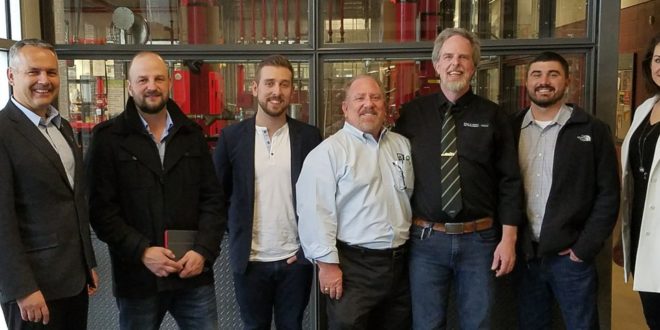 COVID and Its Impact on Construction

Save on All On-Demand Recorded Webinars

Humility, Honesty, and Hard Work are Keys to Career Success

Kevin Mozak, the 39-year-old president of Meridian Fire Protection in Edmonton, Alberta and founder/chairman of the American Fire Sprinkler Association’s (AFSA) Alberta Chapter, has been described as one such self-made man. Mozak started Meridian in May of 2006 as a one-man-in-a-van operation with only one contract. Today, the Edmonton-based company – which installs and services residential and commercial fire protection systems – has a fleet of 28 service vehicles and nearly 50 employees. As AFSA’s first Canadian national committee member, Mozak serves on three national committees, including the Apprenticeship & Education, Membership & Chapter Development, and Public Education & Awareness.

For these reasons, AFSA is pleased to announce that Mozak has been elected by a panel of his peers on the NextGen Initiative as the recipient of AFSA’s 2018 Young Professional of the Year award. The award highlights the efforts of a young and talented fire protection professional, who is under 40 and demonstrates exemplary technical, professional, and inclusive leadership skills not only in their own businesses but also at a national level. The third annual award will be presented during the general session at AFSA37: Convention, Exhibition & Apprentice Competition held at the Gaylord National Harbor in Washington, DC.

Building a Business Mozak started in the fire sprinkler business when he was 18. For a decade he worked for a handful of Edmonton’s largest sprinkler firms, including Grinnell Fire and Viking Fire. But in 2006, just after the birth of his first son, Mozak decided to head out on his own and found Meridian Fire Protection.

Mozak recalls: “I borrowed some money from my father-in-law and got a van. I didn’t have a business plan. I was lucky.”

As Meridian’s core business began to grow, Mozak continued to do everything himself, often working from sunup to sundown. The hard work paid off and Mozak hired his former helper Michael Jackson, who still works for him today, to help run the company and complete work orders. “Back then, no one wanted to do service and maintenance. In the beginning, we didn’t even have a website, but we did good work,” says Mozak.

By 2007 Mozak realized he needed more employees to fulfill the growing orders. Mozak outlined a plan to add installing and upgrading systems in addition to maintaining them. As the business grew so did the accolades. In 2010, Meridian was named by Canada’s Profit magazine as one of its “Top 50 Start-ups.

Jackson, who has worked with Mozak for 17 years – 12 of which have been at Meridian Fire Protection, Inc., said he wasn’t surprised when his boss and friend sought to help others and the industry. “His tutelage to me as a new apprentice 17 years ago was always one of sharing his knowledge. He was never one to hoard knowledge to protect his own employability. Since I have attained my journeyman status, his support and encouragement to further educate myself in other aspects of the sprinkler trade have been pivotal in my being able to become a better fitter and provider for my family. This support and encouragement for education are not limited to employees, as he routinely offers support and serves as a sounding board for other contractors, customers, and Authorities Having Jurisdiction when needed.”

Oh Canada! In 2017, AFSA officially expanded north of the US/Canada border, but the process all started when Kevin Mozak approached the AFSA booth at the 2016 NFPA Conference in Las Vegas, Nevada. Mozak felt that merit shop contractors in Alberta didn’t have enough training and educational opportunities or a unified voice on legislative issues. He says, “I saw the benefits of being part of an association, but open shop is growing in Canada and there was no one talking on behalf of open shop and talking about our issues, like fitter compulsory certification, here.”

Mozak says he wanted to change that, and AFSA was more than happy to oblige. “[Kevin’s] decision to approach AFSA regarding its first Canadian chapter was no surprise to anyone who knows him, as his message throughout his career so far has been one of ‘education and information.’ He feels strongly that his values towards the sprinkler industry align with those of AFSA,” says Jackson.

During the AFSA’s 2016 convention in Nashville, Tennessee, Mozak attended its Chapter Leadership Conference. There he learned chapter development best practices through presentations, panels, and roundtable idea exchanges. He took the things he had learned and the connections he made back to Alberta and started the process of building a chapter.

He recruited new contractor members, exposing them to the benefits of AFSA membership and opportunities a chapter could bring to the market. “Our market here in Edmonton continues to yield opportunities for growth in our industry; however, as you can imagine, bringing the personalities to together to focus on what’s best for our industry and the products we deliver to the end-user rather than what’s best for individual companies is no easy endeavor,” commends Ken Proud of Proudline Fire Protection Services, Ltd. “It takes the determination and commitment of many, but without strong leadership, the potential cannot be realized.”

On April 28, 2017 the founding contractor members officially signed a letter of intent to start an AFSA Alberta Chapter, and in June 2017 they elected their first board with Mozak naturally assuming the position of the chapter’s first chairman.

As the open-shop philosophy continues to grow in Western Canada, Mozak has been able to look past day-to-day competition to grow and better the industry through AFSA benefits such as training and increased communications with other fire sprinkler professionals in the province.

“Over the years there have been many discussions about forming a local association to work on opportunities for growth and change without success,” continues Proud. “After attending some AFSA events, Kevin recognized the value and opportunities that could be realized within our market and our province if we aligned with AFSA and he began the heavy lifting required to bring the benefits of an AFSA affiliation to our industry here in Alberta. This affiliation is yielding immediate results.”

Since forming the chapter, Mozak feels the voice of the merit shop contractor is finally being heard. “Open shop and union never sat at the same table before to talk industry, and now, we’re fighting compulsory certification from a joint committee. It’s very exciting.”

“In his quest for becoming a better contractor he encouraged seven or eight other contractors to join AFSA as well as encouraging Vancouver to form its own chapter,” recalls AFSA Secretary of the Board Linda Biernacki of Fire Tech Systems, Inc., who also serves as chair of the Membership & Chapter Development committee.

Following its success in Alberta, AFSA founded its Vancouver Chapter in September of 2017. “Kevin is a big reason why AFSA has chapters in Western Canada,” says AFSA Director of Member Services Bradley Elliott. “He is very humble about his role in bringing AFSA to Canada, but from the moment I met him, it was clear he understood the communication, networking, public awareness, and legislative clout that a local chapter could bring. He is a great leader for the Alberta Chapter with a vision to strengthen merit shop contracting in Western Canada.”

Despite all his worldly success, Mozak is also one of the most humble and generous human beings around. When asked about his role in AFSA’s northern expansion, he simply says, “I was the guy who did the homework. I was a guy with an idea, but I didn’t do it alone. I have strong competitors, but many are good friends who also believe in the vision.”

One such competitor is Ken Proud, who has mentored and supported Mozak’s endeavors, comments, “Kevin has taken a significant amount of time from his family and his business to build a strong foundation for the AFSA here in Alberta and I commend him for his efforts and support his selection as AFSA Young Professional of the Year.”

While he concedes that it has taken time to build his business as well as the chapter, Mozak says it’s important to empower people and for them to learn to make mistakes as well as tactical decisions. At home, he is working to instill those same values of hard work and humility with his wife of 15 years, Nicole, in their four boys – Connolly, 13; Drake, 11; Cash, 9; and Cruz, 8. In his spare time, he enjoys trips to his family’s lake house and coaching his son’s youth hockey teams. (And, yes, the family are big Edmonton Oilers fans.)

One to Watch This year marks the third annual Young Professional of the Year award – awarded by AFSA’s young professional group the NextGen Initiative. For three years, AFSA’s NGI has been on a mission to recognize the outstanding talent and achievements of young professionals in the fire sprinkler industry. These young professionals aged 40 and under can be described by a variety of adjectives – movers and shakers, disrupters, innovators; but by all definitions, NGI’s Young Professional of Year award winners are most recognized for how they shape the business landscape with their passion and sense of community.

Meaghen Wills, chair of the NextGen Initiative and the inaugural winner of the Young Professional of the Year award, knows what takes to grow at the local and national level. As the chair of the Mid-Atlantic Chapter, serving Pennsylvania and Delaware, Wills has rebuilt her chapter and admires Mozak’s effort. She says, “Kevin has a big passion for the fire sprinkler industry. I admire the task that he took on with building AFSA in Canada and I’m looking forward to seeing where he takes it.”

The award also seeks to promote the emergence of young, talented professionals and inspire companies to invest even more in the development and excellence of the profession. “It has been very exciting to get know Kevin a little and witness firsthand the passion he has for the fire sprinkler industry,” says AFSA Chairman of the Board Wayne Weisz, Cen-Cal Fire Systems, Inc. “He has been motivated to get involved with AFSA and learn about all of the training programs AFSA has to offer. He has taken that knowledge back and incorporated it not only in his own company but also shared it with other merit-shop contractors in Central Canada.”

Biernacki was also excited to hear that Mozak had been selected by his peers as this year’s Young Professional of the Year. “He certainly is the epitome of the industry’s young successful professional,” she recalls. “I remember the first time I met Kevin, I asked him why he joined AFSA. Without hesitation, he told me we were the premier organization for training and industry best practices for the fire sprinkler contractor. I was immediately impressed by his enthusiasm about becoming more involved with AFSA and the opportunities for not only his company but more importantly his competitors to embrace the culture of training and instilling excellence in all we do. Kevin has amazing energy and I am very excited about his future and AFSA’s future with our NextGen Initiative!”

The third Annual Young Professional of the Year Award will be presented to Mozak during the general reception Tuesday, October 2 at AFSA37: Convention, Exhibition & Apprentice Competition in Washington, DC. For more details on AFSA, its NextGen Initiative, or AFSA37, visit firesprinkler.org. 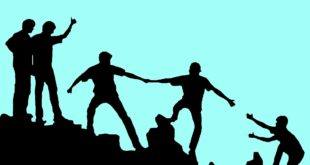 Rather than make this article just one more message about the coronavirus, I thought that …