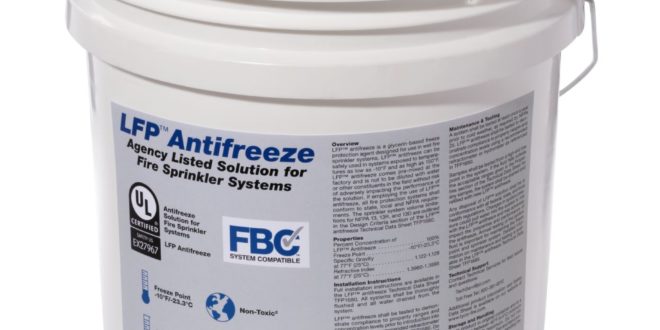 Corrosion is an issue that has long plagued the fire protection industry. Corrosion of pipes, valves, sprinklers, and other components used in a fire sprinkler system has been a costly problem, not only because the systems themselves need to be replaced if corrosion occurs, but because leaking systems can cause property damage. When an application calls for freeze protection, contractors must evaluate cost, corrosion risk, and system response time as factors in the search for the right solution.

Propylene glycol and glycerin are the two freeze protection ingredients used in antifreeze solutions. The maximum percentages of these ingredients in a solution are limited by the 2017 edition of NFPA 25 as a result of combustibility testing. While both offer advantages over dry pipe fire protection systems, corrosion can be a drawback to antifreeze, especially with propylene glycol-based solutions. Additionally, it should be noted that NFPA requires the use of a listed antifreeze in all new systems and that existing systems be replaced with listed antifreeze by 2022. As of the writing of this paper, there is only one listed antifreeze product on the market: TYCO® LFP® Antifreeze, a glycerin-based solution from Johnson Controls.

In addition to the cost-benefit of NFPA allowing glycerin-based antifreeze solutions to be used in CPVC fire sprinkler systems, glycerin offers the significant advantage of lower corrosion risk attributed to its electrical conductivity and pH stability.

The Chemistry of Corrosion

In any metal wet pipe sprinkler system, corrosion can occur between the different types of metals that make up the system. Corrosion in fire sprinkler system piping or components occurs due to an electrochemical cell forming and electrons (a type of subatomic particle) being transferred from the surface of one metal to the surface of another. The loss of electrons causes the metal to deteriorate and over time. This deterioration can reach a point where the metal can no longer sustain its integrity.

The LFP® Antifreeze formulation has an electrical conductivity value lower than some municipal water providers in the United States, with a range of 1000-1400 μS/cm (as a reference, freshwater is typically a range of 50-1500 μS/cm). This means that using LFP® Antifreeze in a wet pipe sprinkler system could potentially decrease the corrosion rate of the system versus a system filled with water, depending on the municipality water supply.

LFP® Antifreeze has been formulated using pH buffers to maintain the stability of the solution throughout the life of the product. This has been demonstrated by UL accelerated life testing in which the antifreeze was subject to extreme temperatures for an extended period of time. The LFP® Antifreeze solution did not form any acidic byproducts and maintained its pH level throughout the duration of the test.

In the development of LFP® Antifreeze, many chemical properties and formulations were considered and tested. With corrosion being a major pain point related to antifreeze systems, lowering corrosion risk was a key factor in determining the final formulation. The use of glycerin allowed for a solution that meets UL Listing requirements while providing a high-quality product that can reduce corrosion risk and associated maintenance issues. For more information, visit www.tyco-fire.com/LFP.