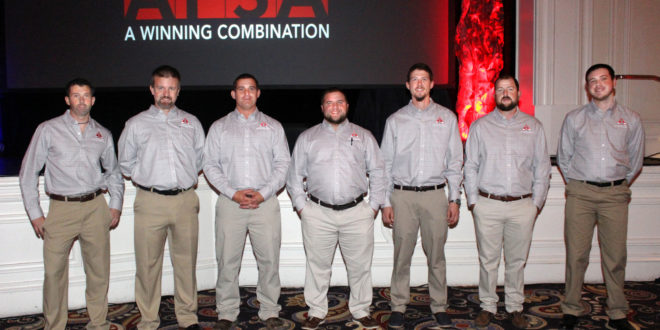 AFSA Showcases “Best of the Best” in 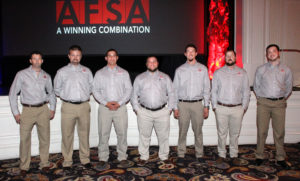 After outscoring well over 100 other hopefuls to secure a spot as one of the seven apprentice finalists, Chance McCollister, Fire Tech Systems, Shreveport, Louisiana, advanced to the competition finals in Las Vegas. From there, McCollister completed the most challenging task yet, outscoring the six other well-qualified finalists to take home first prize.

Road to the National Competition From a young age, McCollister started in construction with his father, but he quickly found a new passion for fire protection when he decided to branch out and learn more about different aspects of construction. He applied to Fire Tech Systems, Inc. and in doing so found a career that both interested and challenged him to strive for his best every day.

McCollister first heard about the apprentice competition through Fire Tech Systems, Inc. He recalls, “I couldn’t take the qualifying test the last year because I was working in Oklahoma, but this year we were all remembering how close our coworkers were to qualifying.” He continues, “Fire Tech Systems is very supportive of its apprentices wishing to join the competition. The encouragement drove me to show them what I was worth and what I could do.”

Once set on competing, McCollister immediately got to work. He studied workbooks, created note cards, and recalled all of his field knowledge for the qualifying round of testing. He studied hard daily and was sure he reviewed all four levels of the AFSA Apprenticeship Program books thoroughly leading up to the competition. This hard work and motivation paid off when McCollister found out he’d advanced to the finals of the 2017 competition. Safety Director and Training Manager for Fire Tech Systems Tracy Hadwin says, “I wasn’t at all surprised to find out Chance had advanced to the finals. He showed a lot of dedication for studying and preparing. He and his wife worked hard, studying nightly, to prepare him.”

The studying didn’t stop there, McCollister and his wife could be seen studying in quiet corners during AFSA36 up until the last minute on Tuesday, September 27, when the seven finalists took the second, more thorough written examination based on all four levels of AFSA/NCCER Contren® Learning Series Sprinkler Fitting curriculum.

The live competition was the last task for the apprentices to complete. For four hours on Wednesday the 27th, the seven apprentice finalists constructed and pressure-tested a miniature sprinkler system in front of a bustling exhibition hall. McCollister recalls, “the competition was slightly nerve-wracking at the start, but once I got started moving and thinking about the next step everything disappeared. I didn’t look at anyone else, I focused on my work and what I knew to do.”

For the practical portion of the competition, each finalist was given a drawing of the system and all of the required materials to install it. Finalists then constructed the system, comprised of five sprinklers, onto a nine-foot tall metal frame structure. Competitors had to measure, cut, thread, and use fabricated materials for the installations per the drawing they were provided. This exercise required pipe threading, math, and pipe make-up skills to complete the mini-system within the four-hour time limit.

During the mini-installation, the apprentices were judged in three areas – accuracy, craftsmanship, and safety – to form their practical score, which were then combined with their written test score to determine the winner.

McCollister said when he heard his name it was, “exhilarating.” Though the competition was over and he was happy with his performance, all the apprentices had acknowledged that it was anyone’s game while awaiting the results. Then McCollister was announced as the first place winner and he says, “There is no other word for it, it was euphoric. I wanted this win so badly for both my career path and my personal life. The opportunity to proudly represent my company and bring home a win is like nothing else.”

In addition to joining an elite group of past winners, McCollister received bragging rights for the next year as well as a $5,000 grand prize. Looking to the future McCollister says, “I will continue to work hard toward [my] goal of becoming a foreman, and know that every day [my] work is saving lives.” McCollister also wanted “to thank Linda Biernacki and AFSA for giving people like me the opportunity to excel in our field by supporting the next generation through apprenticeship programs.”

Linda Biernacki, president of Fire Tech Systems and Secretary of AFSA’s Board of Directors praised both the National Apprentice Competition as well as the AFSA and regional apprenticeships programs saying, “We are so proud of [McCollister’s] win. It represents the depth and seriousness of our apprenticeship program that we continually put great effort into. It shows the value of apprentice programs on both the regional and national level,” she continues. “We provide educational tools to these apprentices and they provide excellence in the work they do and how they represent us in the field. It’s a win-win.”

In addition to the expense-paid trip to Las Vegas to compete at the AFSA convention, each of the national finalists received a commemorative plaque, tools, cash prizes, and a complimentary convention registration for their employer to attend the convention to cheer them on!

History of the Competition Started in 1994 by the late Robert L. (Bob) McCullough, then chairman of the Apprenticeship & Education Committee, AFSA’s Annual National Apprentice Competition was created to promote apprentice training and give recognition to the apprentices who are actively enrolled in the AFSA Apprenticeship Program. Over 20 years later, the competition continues to bring fire sprinkler apprentices from AFSA local chapter and member training programs from all corners of United States together in the association’s foremost showcase of excellence in training among future industry leaders.

Enrolling in AFSA’s apprentice training program not only offers an excellent education and a fulfilling career, it is also the gateway to competing in the AFSA National Apprentice Competition. Entry forms for next year’s event at AFSA37: Convention, Exhibition & Apprentice Competition at the Gaylord National Resort & Conference Center in Washington, D.C. September 30 – October 3 will be made available spring of 2018. For more information or to view photos of the apprentices in action as well, visit firesprinkler.org/AFSA36.