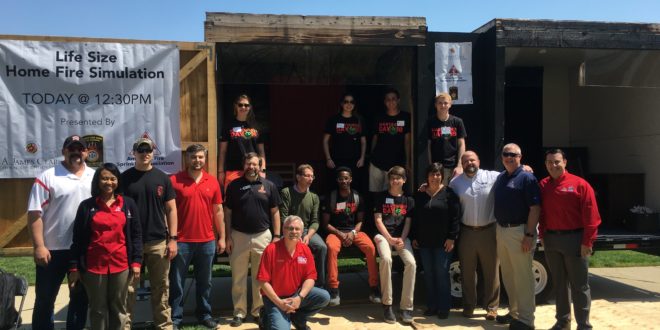 Members of AFSA’s Board of Directors, contractor and associates members, and AFSA staff joined together with University of Maryland faculty and students to generate awarenes of the fire protection industry at Maryland Day 2018. One event AFSA sponsored was a side-by-side sprinkler demonstration.

As part of its increased focus on public education and awareness, the American Fire Sprinkler Association (AFSA) was proud to support the University of Maryland (UMD) Department of Fire Protection Engineering’s side-by-side sprinkler demonstration as part of its 20th annual Maryland Day celebration on April 28, 2018.

A one-day celebration of learning and discovery, Maryland Day featured hundreds of free, family-friendly exhibitions, performances, and demonstrations that showcase how UMD students and faculty are transforming the community, the state, and the world. Now in its 20th year, the university invited over 60,000 current students, staff, families, and prospective students to explore its 1,200-acre campus.

“Each of the departments are encouraged to show off a little bit and get people excited about things that are going on at the university,” states Dr. Kenneth Isman, PE, professor of fire protection engineering  (FPE) at UMD. “[The Department] has three different areas set up around the campus for Maryland Day, and we have our fire protection labs setup with different experiments.”

Utilizing a whole crew of college students, all of the FPE Maryland Day experiments were facilitated by students under the supervision of faculty and staff. For the first time at this event, the FPE department conducted a live side-by-side burn demonstration of a typical house fire. A 40-ft trailer, sponsored by AFSA, was split into two small rooms filled with IKEA furniture – one with a sprinkler system, one without.

“We made both rooms like dormitories since we’re on a college campus,” adds Isman. “They were outfitted with a simple bed, dresser, desk, and chair, and we showed what an incredibly large fire can happen even with such spare furnishings and the tremendous power and speed of fire.”

AFSA was the exclusive sprinkler partner for the side-by-side sprinkler demonstration. “This was unique from the side-by-sides that we typically do because it was tied to the department’s fire modeling. Now, they are comparing the findings of the thermocouples registered in the rooms to the computer fire models to see how accurate the models are,” states AFSA Second Vice Chairman of the Board Jack Medovich, FPE, senior vice president of Fire & Life Safety America in Hanover, Maryland.

Named a “Top 20” event, the demonstration on Mitchell Field provided proof of the importance of fire suppression systems to hundreds of onlookers. “It was a very successful burn. There were lots of people here and I think they learned a lot. They were really able to see what a fire sprinkler can do in a fire. It’s an impact,” concludes Medovich.

In addition to the side-by-side, another feature was a fire tornado, created in a room with four specially-located openings which induces a “whirl” when the hood was turned on.

Maryland Day is wonderful opportunity for visitors to tour the FPE laboratory to see what the program is all about. For more information about the UMD FPE program, visit enfp.umd.edu.