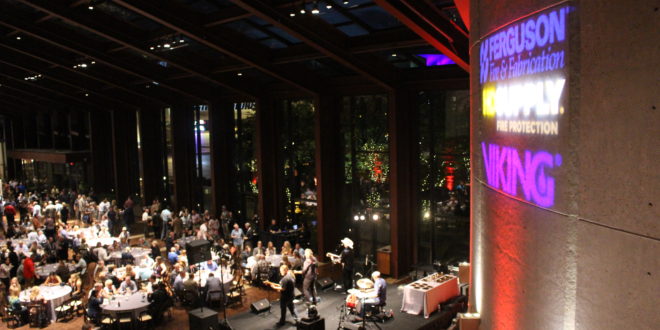 The Country Music Hall of Fame was an entertaining venue for the final night Awards Party.

More than 1,250 industry professionals from across the nation and around the globe gathered for A Grand Ole Opportunity: AFSA in Nashville to reflect on our successes and look to our bright future. At the 2016 show, we charted a course for the future, heard from some amazing speakers, and celebrated some of our industry’s best and brightest stars.

The Henry S. Parmelee Award is the association’s highest honor and it is presented to an individual who has made significant contributions to the fire sprinkler industry through outstanding leadership and advancement of the industry. This year, the award was presented to AFSA President Steve Muncy, CAE, for his 28 years of service to AFSA and the industry.

“I have loved my work at AFSA and love the people I work with,” said Muncy, who will retire at the end of 2016. “This is a critically important industry and our message of saving lives and property needs to be shouted from the mountaintops! I am proud, very proud, to have been a part of this effort.”

The Fire Sprinkler Advocate of the Year Award, which honors individuals not directly involved in the fire sprinkler industry whose efforts have significantly advanced the fire protection industry, was awarded to Ed Altizer, retired Virginia fire marshal. He served for 20 years on the Virginia Fire Services Board and on several other national and state committees responsible for developing the building and fire codes which are used as the basis for Virginia’s building and fire codes.

Adding to excitement, AFSA awarded its first Young Professional of Year Award to AFSA’s Next Generation Initiative Chair Meaghen Wills of Anchor Fire Protection, Perkiomenville, Pennsylvania. The award seeks to highlight the efforts of a talented fire protection professional under 40.

The convention committee, chaired by Linda Biernacki of Fire Tech Systems, Shreveport, Louisiana, welcomed a sold-out exhibition hall showcasing nearly 150 companies for a southern-inspired menu beginning with a reception for exhibitors. The cocktail hour was hosted by Chairman of the Board Michael Meehan of VSC Fire Security, Inc., Virginia Beach, Virginia. Guests mixed and mingled while browsing through hundreds of booths presenting the industry’s latest and greatest innovations.

Also held during exhibits was the National Apprentice Competition, the largest fire sprinkler fitter contest for creative and ambitious apprentices in North America. This year’s winner Jonathan Offord with Commonwealth Fire Protection in Leola, Pennsylvania was announced at an awards reception at the Country Music Hall of Fame, where over 500 people gathered to celebrate.

Make plans now to join AFSA in Vegas! AFSA’s 36th Annual Convention & Exhibition will be held September 24-27, 2017 at The Bellagio Hotel in the heart of the world-famous Las Vegas strip. We hope to see you there!

Previous Chairman’s Message: A Different Way to Measure
Next Sprinkler Geeks are Everywhere!