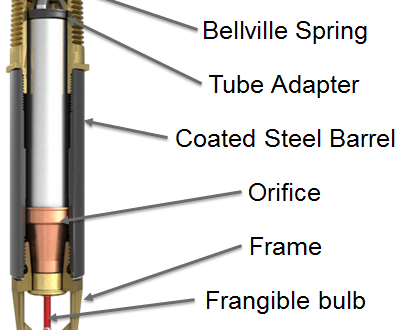 More Technology Available Than in the Past

For over 30 years I have been straining my neck looking straight up every time I enter a building to get a glimpse of what sprinklers were installed. Whether it was as a contractor in my early years or working for a manufacturer, it was always the same thing: who installed it, who made it, and was it designed per the local code requirements? The one thing I could be confident of was all manufacturers went through a rigorous series of testing to receive approval by one or several listing agencies. Sprinklers are rather simple devices; they have a set temperature at which they activate. They contain few components for an upright, pendent, or sidewall sprinkler: a frame, seating mechanism, bulb/link assembly, and deflector. But when we decided to develop a dry sprinkler, that’s when it got complicated.

Since the first UL-listed dry barrel sprinkler in 1937, our industry has been installing dry sprinklers that are capable of protecting areas subject to freezing for over three-quarters of a century. (See Figure 1.) A dry sprinkler’s components consist of that same sprinkler mentioned above, but it is permanently attached to a nipple allowing a piping transition from heated to unheated. With the addition of the dry barrel, dry sprinklers are now able to easily satisfy the design challenges that can handle ambient temperatures that would normally freeze the water within the piping network. Over the years, dry sprinklers have been installed in wet and dry systems, freezers and coolers, parking garages, loading docks, outdoor walkways, balconies, and attics. Most manufacturers have a wide array of offerings from standard response uprights to early suppression fast response (ESFR). Currently, there are over 100 different types of dry sprinklers offered by the major manufacturers with standard lengths varying in increments of 1/4-in. or 1/2-in. up to the maximum listed length of 48-in. Sprinkler temperatures usually range from 155°F to 286°F and are offered in numerous finishes and configurations. With so many choices, ordering can be a task in itself.

The core challenge of developing and listing a dry sprinkler is its ability to manage cold conduction as temperatures move from a freezing space to the water seal in the barrel. To achieve this, the dry barrel inlet is comprised of an inlet seal, plug, yoke, and spring. This component attaches to a casing (extension nipple) that connects to a sprinkler listed for dry use. (See Figure 2.) This sprinkler must have a weep hole to allow for future field inspection and confirmation that an ice plug or build up is not present. A direct cause of build up is an interchange of warm moist air from outside a compartment coming in contact with the drier cold air within the freezer. Condensation forms on the sprinkler and freezes. This ultimately will obstruct or damage the sprinkler or assembly.

Similar to a typical sprinkler, dry sprinklers must undergo the same rigorous testing at the laboratories for approval and then some. UL 199, Standard for Automatic Sprinklers for Fire-Protection Service, Table 14.2 defines the testing criteria for all sprinklers at UL. In addition to the sprinklers installed for wet and dry systems, there are a few more requirements for dry sprinklers. Section 26, Dry Sprinkler Air Tightness Test, ensures that the dry sprinkler will not display any air decay from 0-15 psig (0-103 kPA) externally when under test conditions. Section 32 requires a lodgement test to verify K-factor discharge coefficient flow to within a delta of 5 percent of previously tested K-factor samples. Finally, after 30 days in a corrosive environment, Section 45 requires that the water seal assembly and components perform as intended, clear the water, and satisfy Table 14.2 in UL 199.

Manufacturing a dry sprinkler is quite complicated when compared to most sprinklers. With failure reports in the late 1990s and studies performed by UL, the National Fire Protection Association (NFPA) issued a TIA that dry sprinklers would be tested every 10 years in service instead of 50 years as previously stated in NFPA 13, Standard for the Installation of Sprinkler Systems. A 1999-2004 study conducted on over 1,000 samples at 150 sites found that approximately 50 percent could not meet the UL 199 standards. In 2003 UL banned the use of O-ring seals. Since then, manufacturers have improved their process. Additionally, enforcement of NFPA 25, Standard for the Inspection, Testing, and Maintenance of Water-Based Fire Protection Systems, has resulted in an increase of field samples from almost zero in the ‘90s to over 5,700 in 2013. Dry sprinklers without O-rings in the last 15 years have proven to be extremely dependable, with less than 1 percent abnormal operation. Unfortunately, with O-rings, this number is between 18-34 percent during that same period.

I identified earlier the basic locations where dry sprinklers are commonly used. That hasn’t changed, but as the “big box” culture exploded, there was a global need for frozen food goods and the ability for owners to convert warehouses economically. In response, the industry needed to expand from 5.6 and 8.0 K-factor sprinklers that we typically saw during most of the 20th century. The use and approval of larger K-factor dry sprinklers were on the top line of all manufacturers’ pipeline as storage hazards became more demanding. The acceptance of extra large orifice (ELO) and ESFR sprinklers became common and the desire to create dry pendants followed. Two manufacturers have been supplying dry ESFR sprinklers for over 12 years. For a period of time, the ELO-type dry pendent that was offered to the market was UL listed. UL allows for a degrading K-factor for dry sprinklers with K-factors other than K 5.6, so it is normal to see a K 8.0 dry sprinkler that is UL listed with a chart that indicates its K-factor becoming smaller when the dry barrel length increased. FM Global does not allow for degrading K-factors. There has been a recent introduction into the market of an FM-approved dry ELO sprinkler. The K-factor must be maintained through all the lengths that are offered, so in this case, from 12-in. through 48-in. long, the K-factor is 11.2.

For the fire sprinkler contractor designing and ordering a dry pendant, numerous items must be identified. Have I identified the correct sprinkler based on occupancy and hazard? (See Figure 3.) Will the dry sprinkler be installed in a corrosive environment where a protective coating or other finish will improve corrosion resistance? Does the design need to consider aesthetics, such a flush sprinkler? Have I reviewed the drawings to determine the exposed barrel ambient temperature in NFPA? Am I connecting to the proper connection off a wet or dry pipe system? How will I protect the clearance around the barrel to properly seal and avoid condensation build up? Finally, have I ordered my dry sprinklers and allowed for manufacturing lead times?

ABOUT THE AUTHOR: Ken Brown has been involved in the fire sprinkler industry since the mid-‘80s as a contractor on the West Coast. He works for Viking Corporation in business development and is active in numerous industry organizations and events. Ken can be reached via email at kbrown@vikingcorp.com.