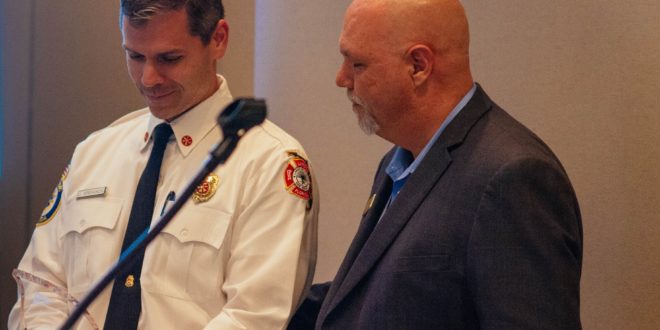 Josh Stefancic has helped thousands of firefighters understand the effectiveness of fire sprinkler technology through his involvement on the executive board of the International Fire Service Training Association (IFSTA). There, he has helped to author and review several training manuals including the “Fire Detection and Suppression Systems,” a guide educating firefighters on the basics of sprinklers. The manual familiarizes the fire service with the types, arrangements, and operating principles of fire sprinkler systems, and is a valued resource for emergency services personnel who respond to incidents in protected premises. Additionally, as a committee member of NFPA 1700, Guide to Structural Firefighting, Stefancic has worked to educate his firefighting peers about the benefits of sprinklering buildings.

“I am so proud that one of our hometown heroes has been recognized for this award,” Johnson comments. “Chief Stefancic is passionate about fire sprinklers and life safety. We are blessed to have him serving in our community and our state.”

Stefancic was recently hired as fire chief of Safety Harbor, Florida Fire Department after a long career with Largo, Florida Fire Rescue most recently serving as division chief. Stefancic started with Largo Fire Rescue in August 2010 as the assistant chief of life safety. He was asked to serve as the assistant chief of emergency management in 2011 and later made the transition to assume the role of district chief in May of 2012. He was named fire chief of the Safety Harbor Fire Department in June 2018.

“I was honored to receive AFSA’s Fire Sprinklers Saves Lives award and hope that the AFSA membership takes comfort knowing that their hard work is directly impacting those in every community across the country by preventing and reducing accidental injury and/or death due to the devastating effects of fire,” Stefancic comments.

Stefancic has a master’s degree in fire and emergency management administration, and a bachelor’s degree in fire protection and safety technology from Oklahoma State University. He is also a graduate of the Executive Fire Officer program from the National Fire Academy in Emmitsburg, Maryland.

Largo Fire Rescue was very appreciative of Stefancic’s recognition, posting this on their Facebook page: “Chief Stefancic joins a distinguished list of fire marshals, building officials, and television personalities who have embraced this technology and have become advocates for fire safety. He has helped thousands of firefighters understand the effectiveness of fire sprinkler technology, through his involvement on the executive board of the International Fire Service Training Association. There he has helped author and review several training manuals written to educate firefighters on the basics of fire sprinklers. We congratulate Chief Stefancic on this well-deserved award.”

EDITOR’S NOTE: AFSA established the Fire Sprinklers Save Lives award in 1998, to recognize individuals outside the fire sprinkler industry who help dispel the myths about fire sprinklers by generating public awareness about this life-saving technology. AFSA’s Public Education & Awareness Committee accepts and recommends nominees for this award and they are approved by the AFSA Board of Directors. To nominate someone for the award, email AFSA Director of Communications Nicole Duvall at nduvall@firesprinkler.org explaining who you would like to nominate and why. The nomination will be considered at the next meeting of the committee.