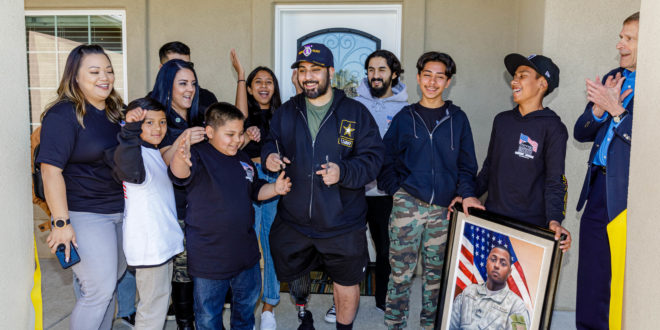 Army Specialist Carlos Gomez, who lost his right leg and sustained severe injuries to his back while serving in Afghanistan in 2011, is getting a home in Menifee, California, thanks to efforts by the national nonprofit Homes For Our Troops (HFOT) and its local partners. HFOT is a privately funded 501(c) (3) nonprofit organization that builds and donates specially adapted custom homes nationwide for severely injured post-9/11 Veterans to enable them to rebuild their lives.

Jeff Bridges, president of JB Fire Protection, Fullerton, California, said, “Representing AFSA and their partnership with HFOT, my entire company was honored to provide design and installation of an NFPA 13D fire sprinkler system with materials donated by Viking Group.”

The home features more than 40 major special adaptations, such as widened doorways for wheelchair access, a roll-in shower, and kitchen amenities that include pull-down shelving and lowered countertops, according to HFOT. To date, the organization has built more nearly 300 homes in 42 states since the company’s inception in 2004. Many of AFSA’s members understand the sacrifice that these veterans have made, and they are eager to donate their valuable resources to the cause.

Bridges, who currently serves as the vice chair of the Southern California Chapter, also spends his time educating the next generation of sprinkler professionals as a California American Fire Sprinkler Association (CAFSA) trainer. “Sharing the experience with my CAFSA apprentices gave them a perspective of what our trade and AFSA is all about,” recalled Bridges. “This made the experience extra special.”

Volunteers came from Menifee and the surrounding communities and to welcome home the decorated Army veteran at the January 25, 2020, key ceremony.  “After being injured, I had no hope in life. I always felt like no one appreciated veterans and my service didn’t mean anything. But receiving this home has lifted my spirits up tremendously. I can’t even begin to express how much this means to me,” Gomez said at the event.

Gomez deployed to Afghanistan in 2011 with the 6th Squadron, 4th Cavalry Regiment, 1st Infantry Division. Three months into the deployment, SPC Gomez’s squad was returning from a routine patrol in Khost Province when his vehicle drove over a 600-pound improvised explosive device (IED), ejecting him from the vehicle and rendering him unconscious throughout his medical evacuation, according to HFOT. When he woke, he learned that his best friend had been killed in the blast and that he had sustained severe injuries to his right leg, right hand, and back.

Now medically retired, Gomez works for the Army Corps of Engineers to provide for his two sons. He often experiences severe phantom pain but chooses to work through it so he will not lose wages that his family depends on. Receiving a donated, specially adapted custom HFOT home mitigates much of this strain and financial worry in his life. “This home enables me to invest more time into my children’s lives and importantly, my healthcare,” he says.

Gomez’s home is one of more than 80 active HFOT home-build projects for injured veterans in various stages of completion nationwide. As the exclusive fire sprinkler provider for HFOT, AFSA. and its local partners team up to both donate and install the fire sprinkler systems. Systems are installed in any home where required by law or in any home where the future homeowner requests fire sprinklers. This partnership provides a robust safety addition to the already highly customized homes that HFOT provides to veterans.

Approximately 4,000 Americans die and 20,000 are injured in fires each year, according to NFPA statistics. The risk of death or injury from fire is even greater for people with physical, mental or sensory disabilities. Through this partnership, AFSA hopes to protect these veterans in their homes, where roughly 80 percent of all fire deaths occur, and decrease their risk of dying in a home fire by 81 percent by installing fire sprinklers.

“I have seen firsthand the appreciation from HFOT home recipients knowing that the fire sprinkler systems that we—AFSA members and associates—are installing free-of-charge will keep them and their loved ones safe,” says Executive Director of AFSA’s Sacramento Valley Chapter Paulene Norwood with Alwest Fire Protection in Roseville, California, who serves as the volunteer coordinator for AFSA’s HFOT projects. “The partnership between AFSA and HFOT was truly a passion for many of us in honoring those that served and in return, keeping them safe.  I truly appreciate all of our members and associates that have stepped up and given so freely of their time and resources to make this partnership a success.”

To find out more or to make a donation, visit hfotusa.org. To learn more about getting involved with AFSA’s HFOT projects, contact AFSA Director of Communications & Social Media Nicole Duvall at nduvall@firesprinkler.org.

ABOUT THE AUTHOR: Nicole Duvall is director of communications and social media for the American Fire Sprinkler Association.

Previous Five Reasons Design Should be on Your Mind
Next Participate in Home Fire Sprinkler Week 2020!