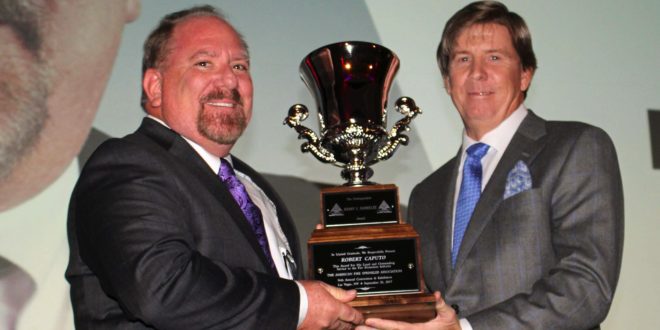 And the Award Goes to…

The American Fire Sprinkler Association (AFSA) is accepting nominations for its top honors: the prestigious Henry S. Parmelee award esteemed Fire Sprinkler Advocate of the Year award, and the new yet highly regarded Young Professional of the Year award. The awards will be presented during AFSA37: Convention, Exhibition & Apprentice Competition in Washington, DC, and the recipients will be featured in Sprinkler Age magazine.

Fire Sprinkler Advocate of the Year Award This award was created to honor individuals not directly involved in the fire sprinkler industry whose efforts have had national impact in advancing the fire protection industry and automatic fire sprinklers. Previously known as the Fire Service Person of the Year, the award was renamed in 2001 to better reflect the diversity of backgrounds, including the fire service, as well as legislative, code, and standards-setting groups, in which individuals can have a major impact on the fire sprinkler industry. Previous recipients include Home Safety Council President Meri-K Appy; Fire- and Life-Safety Educator Jan Gratton; Home Fire Sprinkler Coalition Spokesman Ron Hazelton; California State Fire Marshal Tonya Hoover; Congressman Jim Langevin; and Senator Rick Santorum. The nomination deadline for this award is April 6, 2018.

Young Professional of the Year Award Created last year the Young Professional of the Year award and honors the contributions of promising fire protection specialists and serves to: reaffirm the growing importance of fire sprinkler knowledge in the world of business and construction management among the next generation of industry leaders; promote the emergence of young talented professionals in the field of fire protection, thus fostering interest for the fire sprinkler profession and a future career in this field of expertise; and inspire fire protection companies and the fire protection community to invest even more in the development and excellence of the profession. Meaghen Wills of Anchor Fire Protection in Perkiomenville, Pennsylvania was the inaugural recipient of this award, and Tiffany Moore, Moore Fire Protection in Issaquah, Washington was the 2017 recipient. Nominations are due by April 6, 2018.

“AFSA is honored to recognize volunteer leaders every year who dedicate significant time, energy and talent toward the advancement of fire sprinkler systems,” states AFSA President Frank Mortl III, CAE. “As role models for others to follow, the impact award nominees have transcends generations as well as the contractor and manufacturer/supplier communities within our great industry.”

Nominees do not need to be a member of AFSA to be eligible. Nominations must be submitted to AFSA via fax at (214) 343-8898, emailed to AFSA Vice President of Meetings & Operations at mgarrett@firesprinkler.org, or mailed to: AFSA, Attn: Award Nominations, 12750 Merit Drive, Suite 350, Dallas, TX 75251. A letter stating which award the nomination is for, the nominee’s name and contact information, and a brief statement of why he or she is deserving is all that is required.

Gather in the Nation’s Capitol Mark your calendars now for AFSA37: Convention, Exhibition & Apprentice Competition, the world’s largest fire sprinkler industry event. To be held September 30-October 3, 2018 at the Gaylord National Resort & Convention Center in Washington, DC, this convention is a one-stop shop for CEUs, the latest product innovations, and networking with others. With an annual attendance of more than 1,500 industry leaders and 150-plus exhibitors, attendees collect an abundance of knowledge, experience and business connections.

Bookmark AFSA’s convention webpage at firesprinkler.org/convention to receive updates about this year’s event. Details on registration, accommodations, the National Apprentice Competition, and a schedule of events will be posted soon.

Previous Too Busy to Train?
Next President’s Report