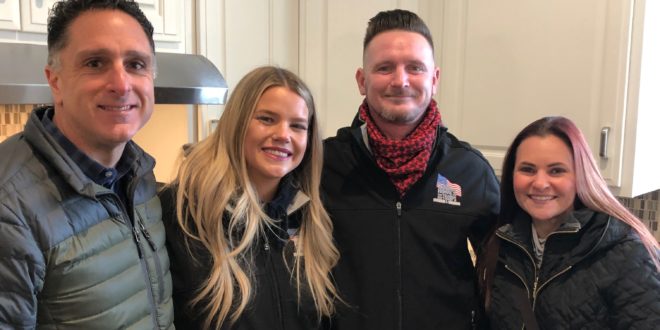 U.S. Army Cpl. Kevin McCloskey, 29, and his wife Bridget were welcomed home January 12, 2019 to their Upper Southampton, Pennsylvania residence donated by Homes for Our Troops (HFOT), a 501(c)(3) organization based in Taunton, Massachusetts that helps severely injured veterans rebuild their lives by building specially modified, mortgage-free homes. McCloskey, a U.S. Army corporal, lost both his legs when a mine exploded under his vehicle while serving in Afghanistan in 2008. He sustained burns all over his body and a traumatic brain injury.

HFOT donated the home to McCloskey, thanks to contributions from donors, supporters and corporate partners, like the American Fire Sprinkler Association (AFSA) that in 2017 became the official exclusive fire sprinkler provider for HFOT.

Kevin McCloskey says he can’t put into words what it means to have received a home adapted to his injuries. “This home makes everyday living that much easier to cope with. I can’t tell you how many times I would get stressed out while just trying to iron a pair of pants. These houses really take away the stress of everyday activities,” he says. “It’s huge, not only for the Veterans but also for their loved ones knowing they have a safe place to live.”

Members of the AFSA Schuylkill Chapter, which serves members in Pennsylvania and Delaware, stepped up to install the NFPA 13D system in CPL McCloskey’s home. AFSA contractor member Anchor Fire Protection in Perkiomenville, Pennsylvania, volunteered to oversee the project and donate the 40 hours of labor to install the residential sprinkler system as the contractor on the project. “It was honor to be a part of this project and help out a vet in need,” said Anchor Fire Protection Fitter Tim Bauer. “Coming from a military family, having a grandfather that died with two Purple Hearts, it means a lot to be able to give back to the people that do so much for us.”

AFSA associate member Viking, who has partnered with AFSA from the beginning, graciously donated all of the materials for the McCloskey’s residential sprinkler system from pipe to the recessed sprinklers. “Viking was honored to participate with Anchor Fire Protection, Homes for Our Troops, and AFSA to help include this vital life safety system in CPL McCloskey’s new home,” said Darren Palmieri, product manager – residential at The Viking Corporation in Hastings, Michigan.

He continued, “As our brave service members can return from duty with life-changing injuries, a residential fire sprinkler system can offer them the extra time needed to escape their home in case of a fire. We look forward to helping protect many more veterans and their homes through this important partnership.”

The McCloskeys said they are beyond grateful and they can’t wait to get settled in their new home. “It’s a definite reassurance knowing that the sprinklers could be the difference between making it out and possibly salvaging some belongings,” said Bridget McCloskey, who has known her husband since they were in first grade together. “For me, I can just jump up and run out of the house, but for Kevin, things take him a little more time. It’s an added layer of protection, especially if I’m not home. I know that no matter the circumstances the house gives him every advantage of being safe, especially with the sprinkler system.”

It’s safety features, like a residential fire sprinkler, that takes some of the onus off of and helps to alleviate worry for spouses or family members or caregivers. “Safety is an important component when we build a home for a severely injured Veteran. We are excited to have the American Fire Sprinkler Association as an outstanding partner, assisting us in building specially adapted custom homes for these deserving Americans,” said HFOT Executive Director Bill Ivey, a retired U.S. Army colonel.

Ivey’s known the McCloskeys for years now as the process, which formally kicked-off in 2016, worked its way toward completion. He calls them “your classic, middle class, hard-working couple.”

Without the burden of a mortgage, Kevin says he will now be able to dedicate more time to helping other Veterans and amputees learn and relearn golf through the Eastern Amputee Golf Association’s First Swing clinics. He also recently took a position with the PGA Helping Our Patriots Everywhere (HOPE) Program, an organization that introduces golf to Veterans with disabilities to enhance their physical, mental, social, and emotional well-being.

As of January 2019, HFOT has built 274 new homes for veterans in 42 states. AFSA highly encourages everyone to visit HFOT at hfotusa.org to learn more about their mission and consider making a donation. For more information on how to get involved with AFSA HFOT projects, contact AFSA Director of Communications & Social Media Nicole Duvall at nduvall@firesprinkler.org.

Previous The Transforming Digital Age of Life-Safety Inspections
Next Thank You for Your Support!